Thekchen Chöling, Dharamsala, HP, India – This morning, His Holiness the Dalai Lama was invited to participate in a celebration of his having been awarded the Nobel Peace Prize in 1989. The event, which was organized by members of the Gaden Shartse Centre, Taiwan, began with a short video of the ceremony in Oslo when His Holiness received the prize. Egil Aarvik, the Chairman of the Nobel Committee read the citation and drew attention to its also being the anniversary of the UN’s endorsement of the Universal Declaration of Human Rights. 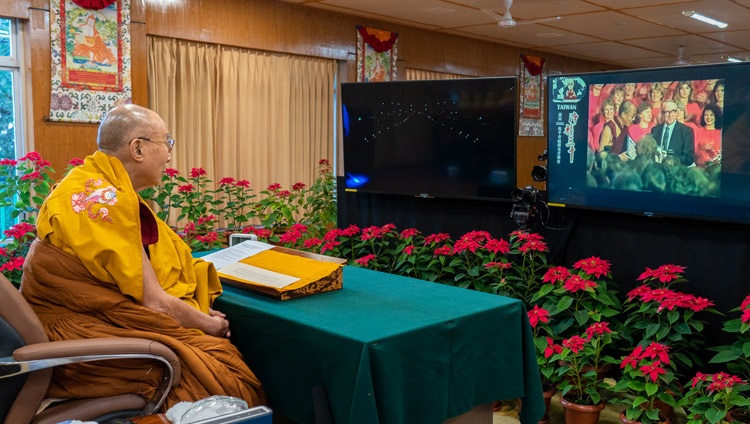 His Holiness the Dalai Lama watching a video of the ceremony where he was awarded the Nobel Peace Prize in 1989 at the start of the program organized by members of the Gaden Shartse Centre, Taiwan on December 11, 2021. Photo by Ven Tenzin Jamphel

In his remarks at the time His Holiness stated that ‘for those who cherish peace, this award is a source of joy.’ He also declared, ‘I hope and pray that soon the truth will prevail and the historic rights of my people will be restored. And to this end I reaffirm my commitment to this struggle, just as I pray every day for an enduring peace on our planet. I will also work hard towards this goal so that a day may dawn when people all over the world will love and help each other and live in genuine harmony.’

The video reminder of His Holiness’s being awarded the Nobel Peace Prize was followed by an energetic gymnastic dance by students in celebration. Next, the presenters invited His Holiness to address the audience.

“Firstly,” he began, “I’d like to greet my brothers and sisters, especially my Han brothers and sisters. We’ve enjoyed close links for centuries. We may have seen political ups and downs, but the close feeling of brotherhood and sisterhood remains. We Tibetans and Han people have our devotion to the Buddhadharma in common. When I visited mainland China, I saw many temples and statues of the Buddha. It’s clear we have close religious links.

“All sentient beings, not only human beings, but birds and animals too, want to live in peace. Amongst all these beings, humans are probably the most mischievous. We have a marvellous intelligence, but sometimes it is misdirected by negative emotions. Predators such as lions and tigers have claws and fangs that equip them to hunt, kill and eat meat. However, they only prey on other animals when they need food. Human beings, on the other hand, cause trouble even when there is no justification.

“Can we change this? I believe we can, because it is our essential nature to be compassionate. From the moment we’re born our mother takes care of us. Without this care we would not survive. This experience is our first opportunity to learn that compassion is the root of all happiness. However, this natural appreciation of compassion seems to fade once we go to school. We need to be reminded that good health and a peaceful state of mind are founded on love and compassion.

“Once we recognize that anger, attachment and hatred give rise to fear and anxiety and disturb our peace of mind, we must use our intelligence to counter our negative emotions. The practice in India of compassion (‘karuna’) and doing no harm (‘ahimsa’) prevailed even before the time of the Buddha and remain powerful and relevant today.

“All our religious traditions teach the importance of treating each other love compassion. The Buddha also taught that a disciplined mind is a source of joy, while an unruly one just brings distress. 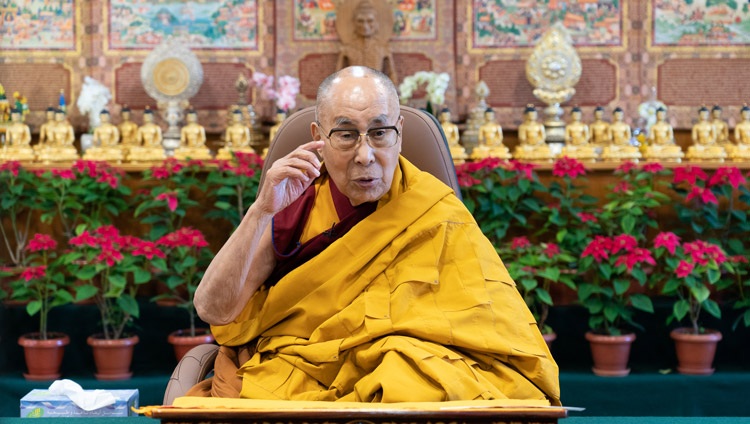 His Holiness the Dalai Lama addressing the virtual audience during a program organized by members of the Gaden Shartse Centre, Taiwan to celebrate his having been awarded the Nobel Peace Prize in 1989 from his residence in Dharamsala, HP, India on December 11, 2021. Photo by Ven Tenzin Jamphel

“I lost my country and became a refugee, but because of my practice, I didn’t get angry about it. From the moment I wake in the morning, I dedicate myself to developing love and compassion. I cultivate the lineage of the profound view, the lineage of extensive conduct, as well as the lineage of practice that brings them together. In this I find the verses of the Indian master Shantideva to be most useful.

“Why say more? Observe this distinction: between the fool who longs for his own advantage and the sage who acts for the advantage of others. 8/130

“For one who fails to exchange his own happiness for the suffering of others, Buddhahood is certainly impossible-how could there even be happiness in cyclic existence?” 8/131

His Holiness affirmed that positive qualities, such as the awakening mind of bodhichitta, can be taught and learned. The practice that combines wisdom with skilful means derives from the Nalanda Tradition and is supported by reason.

Next, His Holiness announced that he would give a reading transmission of ‘Illuminating the Threefold Faith: An Invocation of the Seventeen Great Scholar-Adepts of Glorious Nalanda’. He began by reading the colophon that ends the work he composed 20 years ago. It outlines his reasons for doing so stating that ‘it is extremely important that followers of the Buddha should have faith based on an understanding of what he taught’.

Coming back to the beginning of the text the first verse praised the Buddha as the teacher of dependent arising. When he reached the verse that extols the great philosopher Chandrakirti, His Holiness mentioned that his principal treatise, ‘Entering into the Middle Way’ describes all the perfections, not only wisdom. He cited the following verses by way of example.

Indeed, anger felt toward the Conqueror’s children
destroys in an instant the virtue gathered
by generosity and morality over a hundred eons;
thus, there is no evil similar to intolerance. 3.6

Wrath disfigures your face and leads you to what is unwholesome;
it robs your mind of the judgment of what is right and wrong;
intolerance is swift to throw you to the lower realms.
But forbearance brings qualities opposite to those just described: 3.

forbearance makes you attractive and dear to the sublime ones,
you become wise in knowing what is appropriate and what is not,
afterward you gain birth as a deva or a human,
and it secures the exhaustion of negative karma. 3.8

Knowing the faults and benefits of anger and forbearance,
respectively, of ordinary beings and bodhisattvas,
shun intolerance and cultivate swiftly and constantly
the forbearance praised by the aryas. 3.9

The following verse refers to Shantarakshita who His Holiness described as having been especially kind to Tibetans. It was he who encouraged the translation of Indian Buddhist literature into Tibetan. 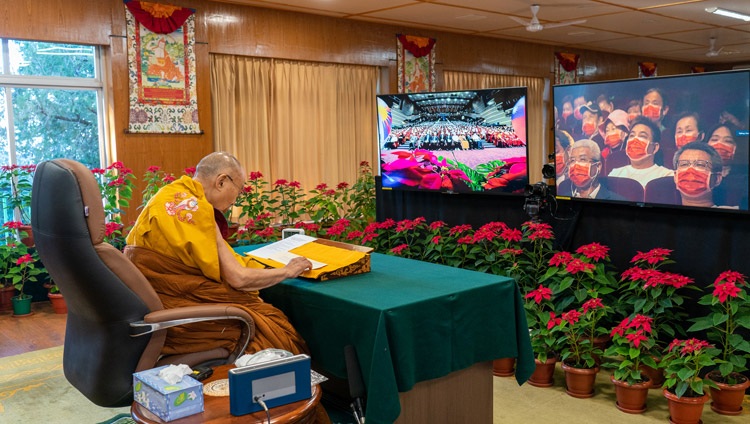 His Holiness the Dalai Lama reading from ‘Illuminating the Threefold Faith: An Invocation of the Seventeen Great Scholar-Adepts of Glorious Nalanda’ during an online program celebrating his having been awarded the Nobel Peace Prize in 1989 from his residence in Dharamsala, HP, India on December 11, 2021. Photo by Ven Tenzin Jamphel

His Holiness read briskly through the remaining verses, pausing to highlight the significance in verse 20 of the lines: ‘Through understanding the meaning of the two truths, the ground reality of how things are, I ascertain by way of the four truths just how beings arrive in and leave cyclic existence.’ He also drew attention to the great aspiration expressed in verse 23: ‘May I, in successive births, perfectly obtain a human life endowed with the three trainings, and serve the doctrine as the great pioneers did, by safeguarding and promoting scriptures and insights through explanation and practice.’

His Holiness disclosed that he felt honoured to have been able to give an introduction to Buddhism and a reading of the ‘Praise to the Seventeen Nalanda Masters’ to his Dharma friends in Taiwan. He mentioned that at the core of the approach upheld at Nalanda are the practices of study, reflection and meditation. Through study you acquire understanding, through reflection you gain conviction and through meditation you integrate what you have learned within yourself.

There was a short presentation of the donation of an ambulance in connection with the days’ celebrations.

His Holiness ended by quoting lines from the end of the ‘Great Treatise on the Stages of the Path to Enlightenment’.

In regions where the supreme, precious teaching has not spread
Or where it has spread but then declined,
May I illumine that treasure of happiness and benefit
With a mind deeply moved by great compassion.