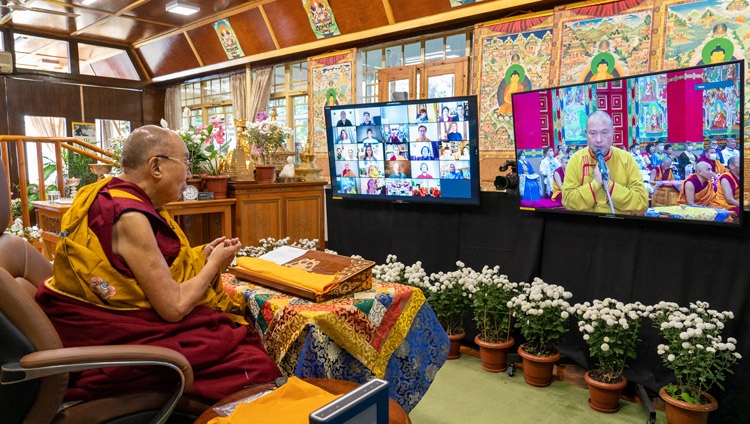 He also mentioned that some years ago Russian Buddhists asked His Holiness to recommend which treatises they might translate into Russian. Among them were books by Maitreya, three of which have now been translated. They are as follows:

Telo Rinpoché expressed pleasure and gratitude that His Holiness had agreed to teach ‘Ornament of Sutras of the Great Vehicle’ on this occasion.

“The Buddha prophesied that his teaching would spread from north to north,” His Holiness began. “We understand this to refer to its spreading from India to Tibet and then from Tibet to Mongolia and associated Mongolian regions. The approach of the Nalanda Tradition is to explain the Buddhadharma in terms of reason and logic. It relies on a thorough understanding of logic and the nature of knowledge as described in Dharmakirti’s ‘Compendium of Valid Cognition’, ‘Pramanavartikakarika’ and Sangharakshita’s work on tenets, ‘Compendium of True Doctrines’, ‘Tattvasamgraha’.

“When I was young there were many Mongolian Geshés, especially at Gomang Monastery. Indeed, one of my debate assistants, Ngodup Tsoknyi, was from Mongolia. These days too, Mongolian students have enrolled in our monastic centres of learning re-established in South India.

“In the past Tibetan Buddhism was dismissed by some as mere ‘Lamaism’. Now it is generally accepted that it derives from the authentic tradition of Nalanda that is based on reason, logic and investigation. Buddhist in Sri Lanka, Thailand and Burma maintain good monastic discipline, but they study neither logic nor the Middle Way or Madhyamaka view. These fields of study are preserved only among Tibetans and Mongolians. It is an honour for me today to offer teachings to Russian Buddhists and students from the Mongolian republics of Russia. 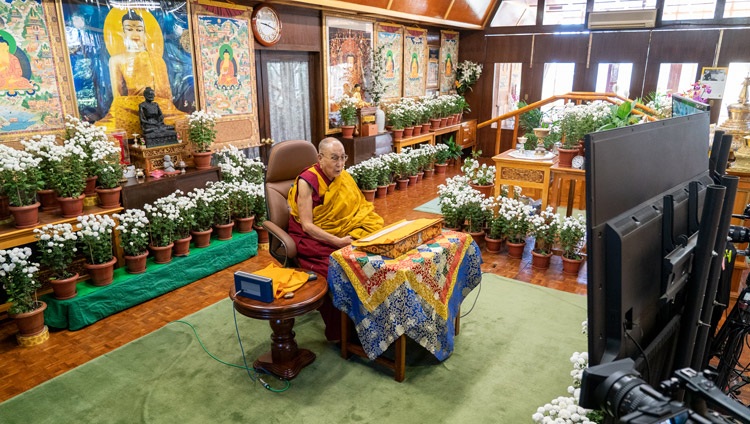 His Holiness the Dalai Lama speaking to the virtual audience on the first day of his online teachings from his residence in Dharamsala, HP, India on November 4, 2021. Photo by Ven Tenzin Jamphel

“When I was first able to visit Mongolia, I witnessed such fervent chanting of the mandala offering that it brought tears to my eyes. At one time Buddhism in Mongolia was crushed by the red communist forces. Consequently, I suggested to the Khambo Lama that it is study rather than chanting that is most important.

His Holiness remarked that these days the reputation of Tibetan Buddhism has risen as scientists have come to appreciate the thorough understanding of the mind and emotions it commands. Scholars see that the tradition is not primarily concerned with faith, but with reason and rigorous study. This is the approach, founded on logic and an understanding of the nature of knowledge, that His Holiness recommends Buddhists in Russia seek to preserve.

“Now is a time when we must make effort to keep our traditions alive. I’d like to request you to work hard to study and preserve them.

“Although there isn’t time to do a complete reading of this text, I’ll begin today. I received a transmission of it from Gyen Rigzin Tempa, a Lama from Kinnaur. We have a tradition, decreed by one of the Tibetan Emperors, of first citing the title of the text in the language of India, then the title in Tibetan followed by homage to the Buddhas and Bodhisattvas.”

His Holiness read the verses of the first chapter of ‘Ornament of Sutras of the Great Vehicle’. He then paused to answer questions from the audience. He was asked what monastics and lay-people can do to support the development of the Sangha at the present time. He replied that in the past, even in remote regions of Tibet, people joined monastic institutions to be able to study. Since they can best serve the community by sharing their knowledge, it’s good for monastics to study the workings of the mind and emotions, as well as logic and the nature of knowledge. 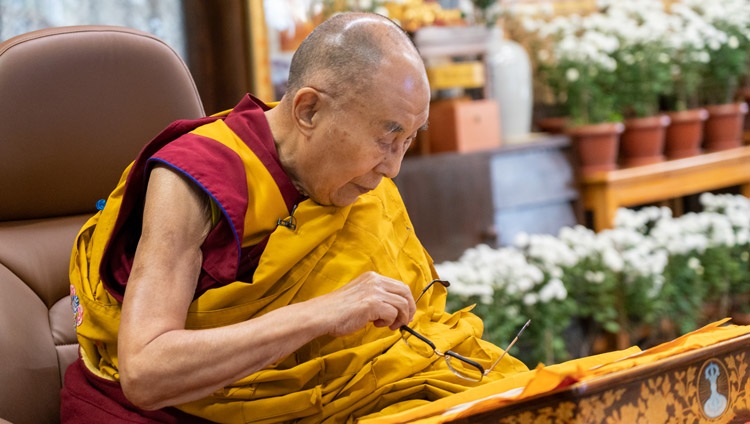 His Holiness the Dalai Lama reading from ‘Ornament of Sutras of the Great Vehicle’ on the first day of his teachings requested by Russian Buddhists online from his residence in Dharamsala, HP, India on November 4, 2021. Photo by Ven Tenzin Jamphel

His Holiness answered a question about karma by stating that in general if a karma is not created there will be no consequences. However, once created, karma generates effects and proliferates. He alluded to his practice of bodhichitta as an example. In the early days he simply admired it, but because he has worked on the practice, reflecting on verses about it from the moment he wakes every day, his engagement with it has deepened. Along with this deeper aspiration he has great peace of mind. He declared that similarly the more you study and examine emptiness, the better you understand it and the better you understand it the closer you come to achieving cessation.

Requested to explain the All-encompassing Yoga His Holiness first pointed out that it is a means of combining the paths of extensive and profound practice. He quoted the verses that close chapter six of Chandrakirti’s ‘Entering into the Middle Way’, which also refer to these and which give him great confidence. The gist of these verses is as follows:

Illuminated by rays of wisdom the bodhisattva sees as clearly as a gooseberry on his open palm that the three realms of existence in their entirety are unborn from the very start, and through the force of conventional truth, he journeys to cessation. He also generates compassion for beings bereft of protection and like a king of swans soaring ahead of other accomplished swans with white wings of wisdom and compassion spread wide, he cruises to the excellent far shore.

His Holiness observed that we tend to be ensnared by narrow, short-sighted self-cherishing attitudes, but as intelligent human beings we can also cultivate conventional and ultimate bodhichitta, which are symbolized as the wings of bodhisattvas that carry them to the excellent far shore.

He clarified that it is not necessary to repeat a mantra in conjunction with the All-encompassing Yoga and that visualizing the dissolution of the elements is more usually associated with the practice of tantra. The key to the practice is to cultivate the awakening mind, the aspiration for enlightenment, and to visualize that represented as a moon disc at the heart. We can do this by reflecting, for example, on verses by Shantideva from his ‘Entering into the Way of the Bodhisattva’.

Proceeding in this way from happiness to happiness, what thinking person would despair, after mounting the carriage, the awakening mind, which carries away all weariness and effort? 7/30

His Holiness added that we all want to be happy, but because of our selfish attitudes we face problems. Therefore, it’s good to wish for sentient beings to find happiness and the causes of happiness. 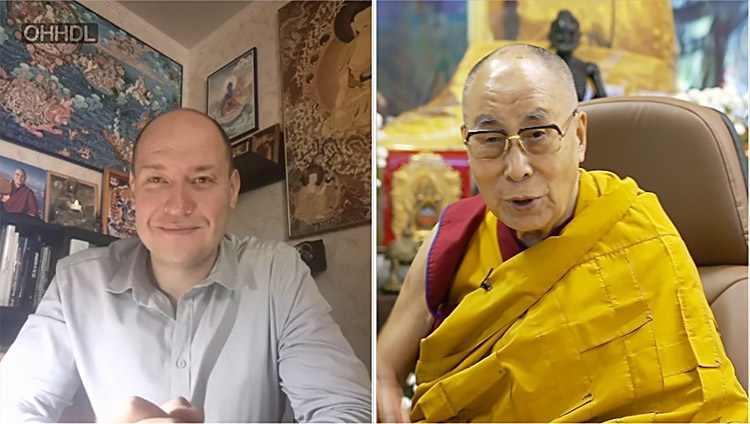 His Holiness the Dalai Lama answering a question from a member of the virtual audience on the first day of his online teachings on November 4, 2021. Photo screenshot of live broadcast

If we then ask where is the person, the self, or ‘I’ who wishes for the good of sentient beings, we find it is not the brain and it is not the heart. The person exists only as a designation. These days, even quantum physicists state that things appear to have their own objective existence and yet they don’t exist in the way they appear. If we search for the ‘I’ we can’t find it. The ‘I’ doesn’t exist independently.

“You can see the Dalai Lama before you,” His Holiness affirmed, “you can hear my voice. But if you try to find me, there’s nothing to be found. Likewise, you appear to me, but you don’t exist other than as a designation. Reflecting in this way, you begin to understand the emptiness of the ‘I’. Imagine this insight transformed into a white vajra standing on the moon disc at your heart. I regularly cultivate conventional and ultimate bodhichitta in this way and it’s very beneficial for me.”

A question about the neutrality of the mind at the time of death prompted His Holiness to discuss the dissolution of the 80 conceptions, the 33 associated with luminous appearance, the 40 concerning luminous increase and the seven related to black near attainment. When these three visions have ceased, the innate mind of clear light manifests. This involves combining an understanding of emptiness, described in the second turning of the wheel of dharma, sometimes referred to as the object clear light, and the luminous nature of the mind revealed in the third turning of the wheel.

With regard to the Four Mindfulnesses, His Holiness made clear that they involve withdrawing the mind and cultivating mindfulness of body, feeling, mind and phenomena. This can be achieved through the four exertions and so forth. The practice is similar in both the Pali and Sanskrit Traditions.

When it comes to making aspirational prayers, His Holiness specified that it is reflecting on their meaning that makes them effective. He recalled a parrot that lived at the Norbulingka Palace in Tibet that had been trained to say ‘Om mani padme hum’ with no understanding of what it meant at all.

Natasha Inozemtseva announced that there were no more questions today, but that every member of the audience was looking forward to the next session tomorrow. His Holiness acknowledged that Russian Buddhists had been the main audience this morning and urged them to do their best to reflect on what they had heard.