Leh, Ladakh, UT, India – This morning, His Holiness was driven in an open golfcart from his residence to the pavilion at the far end of the Shewatsel Teaching Ground. More than 45,000 people are estimated to have gathered to listen to his explanation of Shantideva’s ‘Entering the Way of a Bodhisattva’. 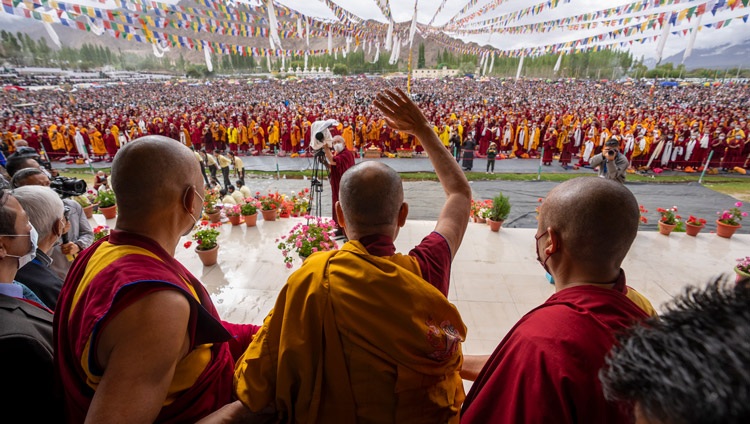 His Holiness the Dalai Lama waving to the crowd of more than 45,000 from the front of the stage of the Shewatsel Teaching Ground as he arrives on the first day of teachings in Leh, Ladakh, UT, India on July 28, 2022. Photo by Tenzin Choejor

Many people thronged both sides of the road, eager to catch a glimpse of His Holiness as he passed. As he waved to them many wept with joy. Before beginning to teach, he saluted the entire gathering from the front of the stage.

His Holiness first congratulated the team of young students who were debating about the mind and mental factors as he arrived. He told them that the most effective way to study Buddhism was to explore the teachings using logic and reason, an approach derived from the Nalanda Tradition. It is this reasoned stance that has attracted the interest of scientists.

“Loving-kindness is the key to happiness,” His Holiness told the crowd. “We experience it from the moment we are born and even when we reach the end of our lives, we will feel more comfortable and relaxed if we are surrounded by warm-hearted relatives and friends. In short, we are social animals and if we are warm-hearted towards others, we will lead happy lives. There is a Tibetan saying that goes, ‘Warm-heartedness leads to happiness and success’.

“It’s also said that your so-called enemy can be your best teacher. Although Tibetans have faced great hardship and misery at the hands of Chinese Communists, I advise them not to harbour feelings of hatred or vindictiveness.

His Holiness the Dalai Lama addressing the gathering on the first day of his teachings at the Shewatsel Teaching Ground in Leh, Ladakh, UT, India on July 28, 2022. Photo by Tenzin Choejor

“If we store up negative feelings towards our adversaries, with the intention of retaliating against them, it will not help us lead happy lives. What’s much better instead is to feel compassion for those who engage in negative actions—keeping in mind that warm-heartedness and forgiveness are the root cause of happiness. Whatever the goal, as a Buddhist monk, I never advocate the use of force to achieve it.

“The people of Ladakh and Tibet have had very close relations from ancient times. If people in the Himalayan region, from Ladakh to Arunachal Pradesh, are able to preserve their Buddhist cultural heritage, they will make a great contribution to the flourishing of Buddhism in the world.

“The courage and spirit of the people of Tibet is undaunted and they have unwavering faith and trust in me. Keeping our Buddhist cultural heritage alive in the Himalayan regions will naturally benefit the Tibetan people. Our struggle for freedom and dignity is based on truth and justice and will be best achieved by relying on ‘ahimsa’, which means observing non-violence and doing no harm. Since a growing number of brothers and sisters in China are Buddhist, I am confident that things will change for the better before long.”

His Holiness mentioned that in the 7th century, despite close relations with China, the 33rd Tibetan Emperor Songtsen Gampo chose to create a Tibetan mode of writing modelled on the Indian Devanagari alphabet. Consequently, when the Indian master Shantarakshita visited Tibet in the 8thcentury, at the invitation of Tibetan King Trisong Detsen, he urged Tibetans to translate Indian Buddhist literature into Tibetan, which would enable Tibetans to learn about Buddhism in their own language instead of relying on Pali or Sanskrit. 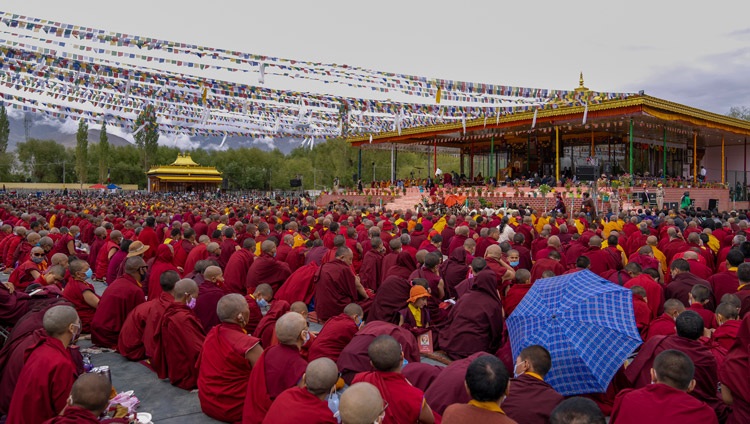 A view of the stage at the Shewatsel Teaching Ground on the first day of His Holiness the Dalai Lama’s teaching in Leh, Ladakh, UT, India on July 28, 2022. Photo by Tenzin Choejor

Subsequently, the Great Abbot Shantarakshita advised the Tibetan monarch to invite his student Acharya Kamalashila to Tibet. The purpose was for him to debate the merits of studying Buddhism discursively according to the Nalanda Tradition in comparison with the view asserted by Chinese monks that enlightenment can be suddenly revealed through meditation alone. In the end, Trisong Detsen judged that Kamalashila’s view was more appropriate for Tibetans.

His Holiness pointed out that the more than 300 volumes of the Kangyur and Tengyur deal with a wide range of religious, philosophical, epistemological and scientific ideas and that today Tibetan remains the most accurate language in which to study them.

Recently, two volumes in the series ‘Science and Philosophy in the Indian Buddhist Classics’ have been published in Chinese translation. They contain materials derived from the Kangyur and Tengyur and have prompted professors in some Chinese universities to acknowledge that Tibetan Buddhism clearly preserves the Nalanda Tradition—an acknowledgement of its scientific and rational approach.

“In the 1960s I visited Tibetan refugees in the Chamba District of Himachal Pradesh, among whom were a large number of monk-scholars, who were working as labourers building roads. Although these monks lacked even monks’ robes, because of the special circumstances we held the “bi-monthly monastic confession ceremony” on the spot and followed it with a debate about Buddhist philosophy. I was very moved by the hardship they were undergoing.

His Holiness the Dalai Lama speaking on the first day of his teachings at the Shewatsel Teaching Ground in Leh, Ladakh, UT, India on July 28, 2022. Photo by Tenzin Choejor

“Eventually, with the support of the Government of India, as well as NGOs and charitable organisations, we were able to re-establish the traditional monastic Centres of Learning in South India.”

His Holiness emphasised the importance of the people of Ladakh preserving their deep Buddhist cultural heritage through the study of Buddhist texts. He cited his own experience of having rigorously studied Buddhist treatises leading to his graduating as a Lharampa Geshé. He quoted a stanza uttered by Arhat Sakalha in the Vinaya Pitaka:

You must make your life meaningful
Through study and meditation.
You must never be satisfied
With merely wearing the saffron robes.

His Holiness urged both monastics and lay-people to study the Three Baskets—the Sutras, Abhidharma and Vinaya—which comprise the words of the Buddha, and to engage in the practice of the Three Higher Trainings—ethics, concentration and wisdom. He reiterated the value of depending on logic and reason rather than relying on mere faith. 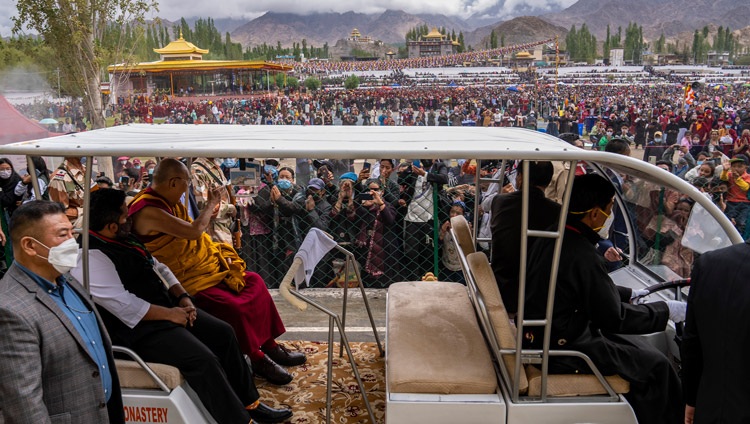 His Holiness the Dalai Lama waving to the crowd as he returns to his residence at the conclusion of the first day of teachings at the Shewatsel Teaching Ground in Leh, Ladakh, UT, India on July 28, 2022. Photo by Tenzin Choejor

After giving a brief summary of Acharya Shantideva’s life, His Holiness began to read ‘Entering the Way of a Bodhisattva’. He elaborated on certain points in the verses as he read them and completed the first chapter today. He will resume his reading tomorrow.