Thekchen Chöling, Dharamsala, HP, India – This morning, His Holiness the Dalai Lama attended a gathering in the garden of the Tsuglagkhang, the Main Tibetan Temple, adjacent to his residence to launch the Monlam Grand Tibetan Dictionary. Guests included Sakya Gongma Rinpoché, the 42nd and 43rd Sakya Trizins, the Head of the Bön Tradition, members of the Central Tibetan Administration, friends and supporters. 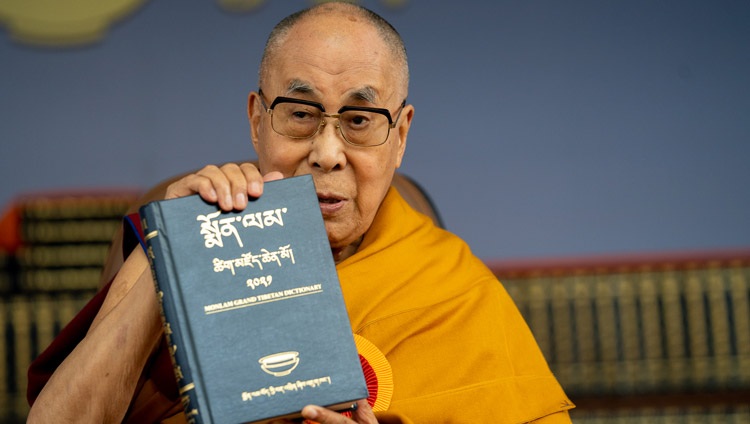 His Holiness the Dalai Lama holding a volume of the Monlam Grand Tibetan Dictionary and the dictionary’s launch at the Main Tibetan Temple in Dharamsala, HP, India on May 27, 2022. Photo by Tenzin Choejor

His Holiness walked from the gate to his residence through the temple yard, taking time to engage with members of the public on the way. He shook hands with some, exchanged a few words with others, and blessed rosaries and other items that were offered to him. He seemed to take pleasure in making physical contact with people after months of Covid related restrictions.

Addressing the crowd, His Holiness told them:

“We Tibetans have a rich religious and cultural tradition. While we were in Tibet, we were not aware of how it compared with other traditions, but once we came into exile we became aware of how precious our heritage is. It’s a practical tradition at the core of which are methods for tackling negative emotions and cultivating peace of mind. In my own daily practice I focus on the awakening mind of bodhichitta and cultivating an understanding of emptiness, which together bring me deep inner peace.

“Practitioners of other religious traditions focus on prayer, but we try to transform our mental attitudes. As Shantideva’s ‘Guide to the Bodhisattva’s Way of Life’ explains, our enemy is our best teacher when it comes to cultivating patience. If we carefully think it through, there are no adverse conditions that cannot be transformed into favourable circumstances. Understanding the workings of the mind and emotions is at the heart of the Nalanda Tradition.

“People talk about peace in the world, but if you have anger and hatred in your heart, talking about peace is simply hypocritical. What we need instead is to cultivate the longstanding Indian traditions of doing no harm (ahimsa) on the basis of compassion for others (karuna).

“Tibetan thinkers considered what to take from Chinese traditions and what to accept from India. What they found to be beneficial they assimilated. We Tibetans have faced all kinds of difficulties, but because of our practice of mind training we have maintained our inner peace. When other people encounter challenges, they resort to taking sleeping pills to get some rest—something we have no need to do. 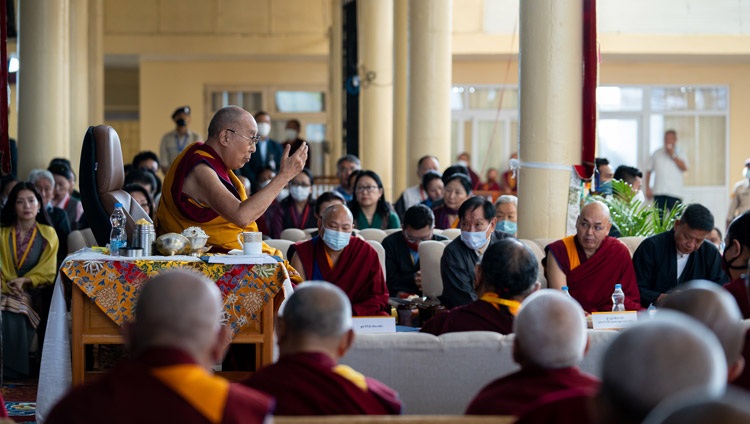 His Holiness the Dalai Lama addressing the crowd at the launch of the Monlam Grand Tibetan Dictionary at the Main Tibetan Temple in Dharamsala, HP, India on May 27, 2022. Photo by Tenzin Choejor

“In exile we requested the Government of India’s help in setting up Tibetan schools where our children could study in their own language. Preserving the Tibetan language has played a key role in our ability to keep our religion and culture alive. I’d like to remind all our friends and Dharma friends gathered here that what is precious about our heritage is that it helps us achieve and maintain peace of mind.”

Tenzin Chimé, the moderator from the Central Tibetan Administration’s Department of Information and International Relations extended a warm welcome to all the guests, who included Sakya Gongma Rinpoché, the 42nd and 43rd Sakya Throne-holders, Ratna Vajra Rinpoché and Gyana Vajra Rinpoché, and the Head of the Bön Tradition, Menri Trizin Rinpoché. She remarked that a lamp had been lit to inaugurate the occasion and called upon Venerable Lobsang Monlam to introduce the Monlam Grand Tibetan Dictionary project of which he has been curator.

He mentioned that the 223 volume dictionary has been compiled, with the support of the Dalai Lama Trust, by more than 200 people working together for nine years. The dictionary is not only available in book form, but has given rise to 37 apps and a fully-fledged website which is updated from time to time.

Ven Monlam declared with pride that, with more than 200,000 entries, this is one of the largest dictionaries in any language in the world. It reveals the vast depth of Tibetan culture. Bringing it to completion is a historic achievement that will make a substantial contribution to preserving Tibetan cultural traditions.

“Inside Tibet,” he said, “the Chinese are trying to eliminate our language and culture, but here in exile we are making even greater efforts to keep them alive. I’d like to thank everyone who has contributed to bringing this project to fruition. We will continue to work on it as we update it over the next ten years. 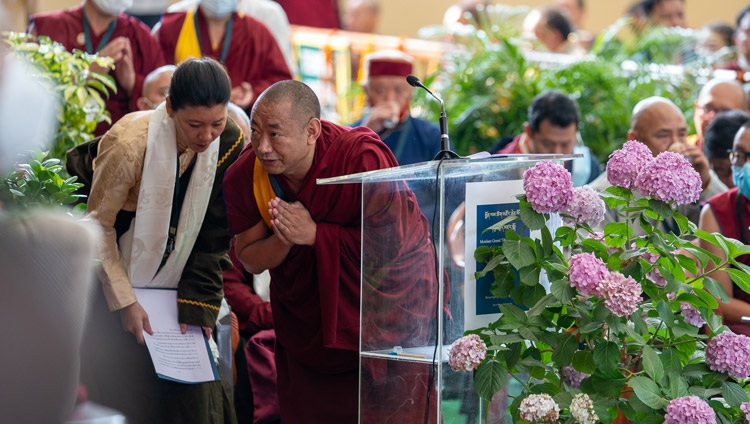 Venerable Lobsang Monlam paying his respects to His Holiness the Dalai Lama after delivering his remarks at the launch of the Monlam Grand Tibetan Dictionary at the Main Tibetan Temple in Dharamsala, HP, India on May 27, 2022. Photo by Tenzin Choejor

“I dedicate the virtue represented by this dictionary to His Holiness the Dalai Lama’s long life and the fulfilment of his vision. I offer a complete set of 223 volumes to His Holiness’s Office and pray that His Holiness and the leaders of all the traditions of Tibetan Buddhism live long. May sunny days for Tibet come soon.”

His Holiness was invited to address the gathering once more.

“We Tibetans have always lived between India and China, but during the reign of Songtsen Gampo we created our own written language based on an Indian model. Later, acknowledging that this gave us the means to do so, Shantarakshita encouraged Tibetans to translate Buddhist literature, including the words of the Buddha and the treatises of countless Indian scholars, into our own language. Consequently, I often tell Indian friends that you were our teachers in the past, but we may be the teachers now because we have preserved the Nalanda Tradition rooted as it is in reason and logic.

“We have techniques for dealing with anger and means to cultivate love and compassion. Practices for extending compassion to others give rise to peace of mind within individuals, which in turn has a positive effect in families and the wider community. Indeed we are today so interconnected that such methods can make a substantial contribution to peace in the world. Without peace of mind there will be no world peace.

“What’s crucial to the teaching of the Buddha is his advice not to take his teaching for granted. He insisted that his followers should examine his words and investigate his arguments in the way that a goldsmith tests the purity of gold. When we read the works of logicians like Dignaga and Dharmakirti, we find they went to great lengths accordingly to appraise and evaluate the views of others.

“Today, Chinese communist hard-liners criticize Tibetan culture without really understanding what it’s about. We may be unable to send these 223 volumes to China at present, but in Taiwan there will be people who can appreciate what kind of culture we have preserved. 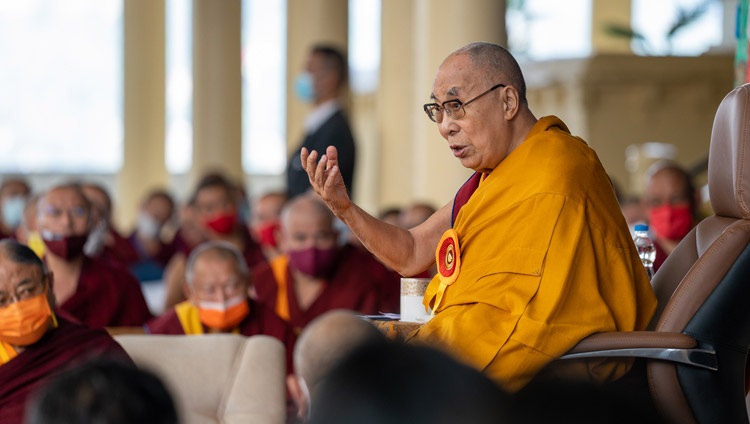 His Holiness the Dalai Lama speaking at the launch of the Monlam Grand Tibetan Dictionary at the Main Tibetan Temple in Dharamsala, HP, India on May 27, 2022. Photo by Tenzin Choejor

“We are not seeking total independence from China, but we need to be able to keep our religion and culture alive. We shall be more than willing to share this knowledge with our Chinese brothers and sisters in the hope that doing so will promote peace between us.

“Our culture originated in India, and today we have all sorts of means to make it better known. I think there would be great benefit in combining aspects of ancient Indian knowledge with modern science. I’m looking forward to discussing how this might be done with educationists and others in Delhi. The most important element is understanding the workings of the mind and emotions, which leads to peace of mind and in the longer run to peace in the world.

“Chinese hardliners misapprehend the value of our religion and culture. Publication of this dictionary, which is already being translated into Chinese, can go some way to educating them.

“A Tibetan I know who studied in China told me that although we are currently under Chinese political control, in the long run things will change and we’ll be able help them spiritually. When Chairman Mao told me that religion is poison, it was because he didn’t know any better. There is great emotional distress in China. We can show people there how to find peace of mind.

“We woke up to the potential of our knowledge and culture when we came into exile and we have worked with courage and determination to keep them alive. I’m only one person and I’ve done what I can, but all of you gathered here can contribute to this too.”