Thekchen Chöling, Dharamsala, HP, India – “Today, I’m going to give the actual empowerment of Avalokiteshvara,” His Holiness the Dalai Lama announced when he had taken his seat on the throne. “Avalokiteshvara is regarded as the embodiment of the compassion of all the Buddhas. And Tibet is the land whose people he is to train. Since the time of the great Dharma Kings, Tibetans have enjoyed a special connection to the one they know as Chenrezig.” 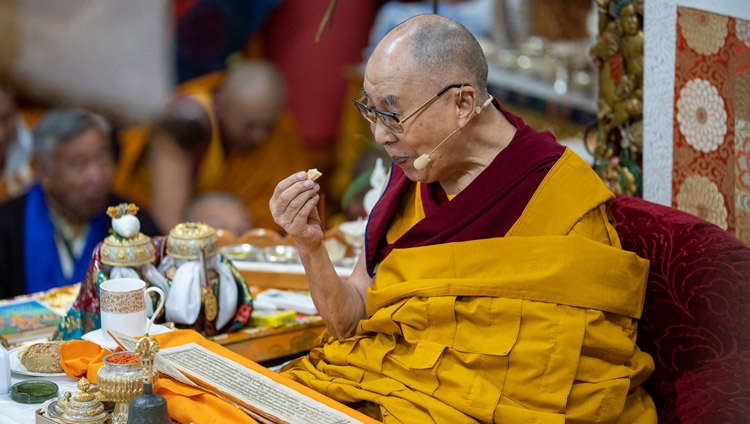 His Holiness the Dalai Lama taking a quick break in the preliminary practices for the Avalokiteshvara Empowerment to enjoy some bread on the second day of his Teachings for Tibetan Youth at the Main Tibetan Temple in Dharamsala, HP, India on June 2, 2022. Photo by Tenzin Choejor

His Holiness repeated the story of the Kyirong Jowo, the Wati Sangpo statue that he has had installed in the Temple for the duration of the collection of Mani mantras. In Tibet there was a celebrated statue of Avalokiteshvara in the Potala, another in the Jokhang, while a third was the Wati Sangpo. When the Fifth Dalai Lama undertook an Avalokiteshvara retreat he brought the three together and experienced visions of deities emerging from the heart of the Wati Sangpo. The monks of Dzongkar Chödé say that different expressions can be seen on its face and His Holiness says he’s noticed that it seems to smile when he’s making prayers related to bodhichitta.

Something prompted His Holiness to mention a rhyme that is repeated when children’s milk teeth fall out. “May I not have teeth like a donkey, may I have teeth like a sheep.” He revealed that he has lost none of his own teeth, but that he had no wisdom-teeth. “However, I have wisdom,” he remarked, “I’m a Bhikshu, a monk fully-ordained in the Buddhist tradition. I received my ordination from Kyabjé Ling Rinpoché in the Jokhang in Lhasa.

Proceeding in this way from happiness to happiness, what thinking person would despair, after mounting the carriage, the awakening mind, which carries away all weariness and effort? 7/30

“It’s good for your health to be calm. That’s one reason why I recommend you students learn to develop peace of mind. Another is to do with your general demeanour. You may have a beautiful or handsome face, but if it wears an angry expression, no one will think you’re good looking. On the other hand, if you just smile, you’re suddenly more attractive. And how do you become calm and achieve peace of mind? By being more considerate of the well-being of others.” 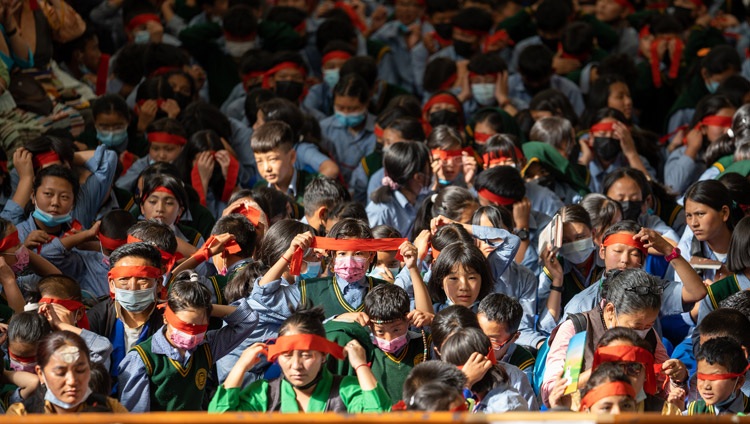 Students in the crowd wearing ritual red blindfolds as part of taking the Avalokiteshvara Empowerment conferred by His Holiness the Dalai Lama at the Main Tibetan Temple in Dharamsala, HP, India on June 2, 2022. Photo by Tenzin Choejor

With regard to secret Vajrayana teachings His Holiness observed that we put a stop to the ordinary appearances of self and phenomena by cultivating divine pride. A reminder of that secrecy is the use of the red blindfold during the empowerment. The next step in the proceedings was for the disciples to generate the awakening mind of bodhichitta. His Holiness pointed out that we all have a seed of compassion that we can nurture and extend limitlessly to include not only our opponents, but all sentient beings across the expanse of space.

He was clear that if we are guided by the awakening mind of bodhichitta, we’ll be happy, relaxed and conscientious. If we cultivate wisdom and method we will eventually attain Buddhahood.

“As a child,” His Holiness vouchsafed, “I wasn’t very interested in studying. But this changed as I grew older, with the encouragement of both my tutors and Khunu Lama Rinpoché. After receiving bodhichitta from him, I’ve cultivated it assiduously every day. You might think, ‘What His Holiness considers valuable, I will practise too.’”

Turning to the wisdom aspect of the path, His Holiness stated that there is nothing whatsoever that is not designated on the basis of other factors.

“Try to pinpoint the ‘I’,” he advised. “You’ll find you can’t find it anywhere within the body, nor outside it. This is because everything is dependent, merely designated. Things have no independent or objective status.

“Every day as I wake up, I meditate on bodhichitta and emptiness, which sets my mind at ease. As soon as I get up I recite ‘In Praise to Dependent Arising’ and Mani mantras, while visualizing Avalokiteshvara on my right shoulder and Tara on my left.”

His Holiness then led the congregation through the generation of the all-encompassing yoga mind which involves first cultivating bodhichitta and visualizing that mind as a full moon disk at the heart. Next he commended his listeners to reflect on emptiness and to visualize that understanding as a white vajra standing on the moon disk. 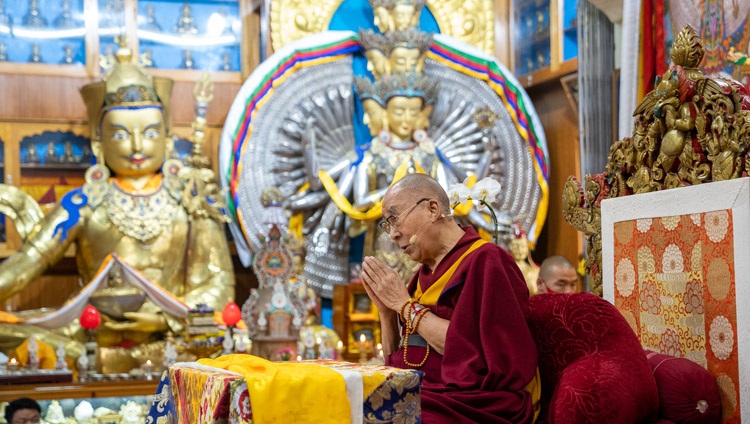 His Holiness the Dalai Lama conferring the Avalokiteshvara Empowerment at the Main Tibetan Temple in Dharamsala HP, India on June 2, 2022. Photo by Tenzin Choejor

The water and crown empowerments were granted. The mantra was transmitted, and the symbols of a universal monarch and the seven royal emblems, which are associated with giving teachings to others, were presented. With that the Avalokiteshvara empowerment was done.

“As people with a special connection to Avalokiteshvara,” His Holiness added, “we Tibetans recite the Six-syllable Mantra even when we’re very young. I’ve imagined all sentient beings as having been benefited today, but especially the people of the Land of Snows, people inside Tibet, people who recite the single verse for my long life. I pray that they may receive Avalokiteshvara’s blessings.

“We’ve been in exile a long time, but we’ve been able to serve sentient beings much more than if we had stayed in Tibet. These days, most of us can easily communicate with each other all over the world, but Tibetans in Tibet are struggling under an authoritarian regime. They are constrained from serving others as much as they might otherwise have done. Meanwhile, those of us in exile have been able to benefit others extensively.

“As I said, I’ve imagined that those in Tibet who have faith in me received this empowerment today. I have similarly imagined those with faith in China, where interest in Buddhism is becoming stronger.

May I, moved by compassion,
Illuminate the teaching of the Buddha where it has declined.
Where it has spread in the past, may I revive it,
And may I cause it to spread where it has not spread before.

“Please be at ease and be happy. His Holiness the Dalai Lama is now 87 years old, although my face doesn’t show it, does it? I’ll live another 15 or 20 years. I’m a guest of India and I feel relaxed here. My knees are not so good, but they are not what’s important. Even from a wheel-chair I’ll still be able to speak. 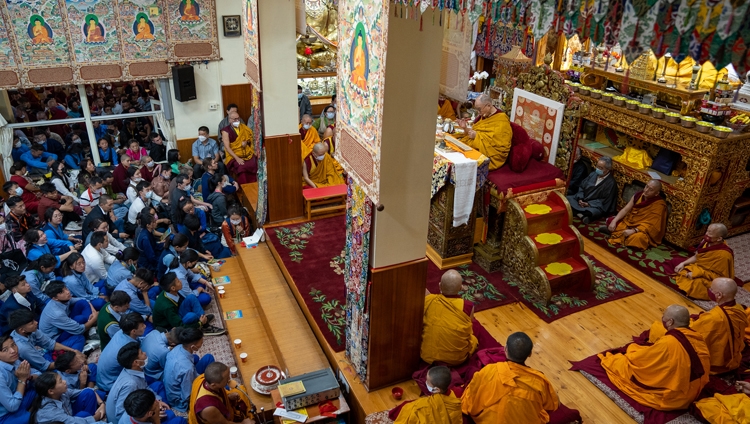 A view of inside the Main Tibetan Temple during the Avalokiteshvara Empowerment on the second day of His Holiness the Dalai Lama’s Teachings for Tibetan Youth in Dharamsala, HP, India on June 2, 2022. Photo by Tenzin Choejor

“The Tibet issue will be resolved. Wherever you are, think about bodhichitta and emptiness. Doing that will increase your accumulation of merit and wisdom and the more you do that, the more it will help the Tibetan cause.

“When I went to China I saw many Buddhist temples and heard many stories about Avalokiteshvara. China is the most populous country in the world and if the Buddhadharma can be revived there it will be good. Please be happy.”

Prayers were recited while His Holiness completed the concluding rites of the empowerment. They included the single verse prayer for his long life:

In the land encircled by snow mountains
You are the source of all happiness and good;
All-powerful Chenrezig, Tenzin Gyatso,
Please remain until the end of cyclic existence