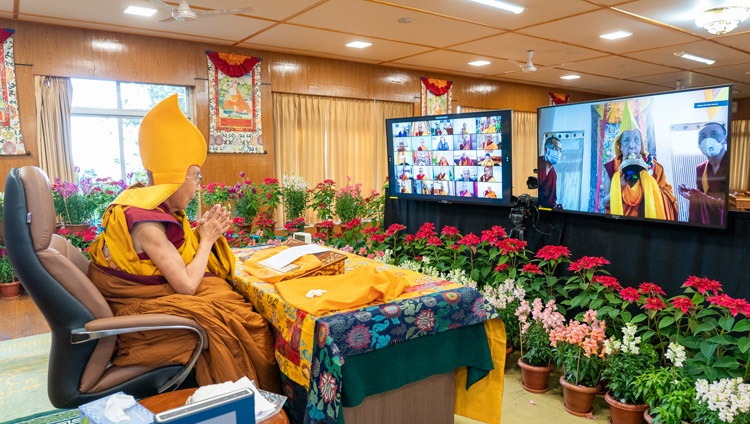 Ganden Tri Rinpoché at his residence in Sera Jé Monastery in Bylakuppe, South India, offering a mandala of the universe and representations of the body, speech and mind of enlightenment to His Holiness the Dalai Lama at the start of teachings on December 29, 2021. Photo by Ven Tenzin Jamphel

This morning, on entering the audience hall at his residence from where he can address a virtual audience, His Holiness the Dalai Lama saluted those waiting to listen to him. Two Chant Masters sitting in the Loseling Science Centre’s Meditation Chapel at Drepung Monastery in Mundgod in South India began chanting prayers which were followed by a brisk recitation of the ‘Heart Sutra’. His Holiness chanted along with them.

Next, the Ganden Tri Rinpoché could be seen at his residence in Sera Jé Monastery in Bylakuppe, South India, donning his pandit’s hat and offering a mandala of the universe and representations of the body, speech and mind of enlightenment to His Holiness. Today’s teaching commemorating Jé Tsongkhapa’s passing away was requested by the Geluk International Foundation. The preparatory recitations were concluded with the verse from the ‘Hundreds of Deities of Tushita’:

In the sky before me, on a lion throne with lotus and moon seat,
Sits the holy guru with his beautiful smiling face.
Supreme field of merit for my mind of faith,
Please stay one hundred eons to spread the teachings.

His Holiness then led the virtual assembly in repeating the verse for taking refuge in the Three Jewels and generating the awakening mind, advising them to correct their motivation. He noted that although today, Ganden Nga-chö, formally commemorates Jé Rinpoché’s passing away, it is also an opportunity to celebrate his study and practice. This is alluded to in the verse of rejoicing in the ‘Hundreds of Deities of Tushita’:

In this degenerate time, you worked for broad learning and accomplishment,
Abandoning the eight worldly concerns to realize the great value
Of freedom and fortune; sincerely, O Protector,
I rejoice at your great deeds.

“The scriptural teachings are to be taught and studied,” His Holiness explained. “The teachings of realization are preserved through practice. So, on this occasion, we should remind ourselves that we are commemorating Jé Rinpoché, his passing away and his teachings. And the proper way to celebrate his teachings is to study them and put them into practice.

“Over many years, due to the kindness of my teachers, principal among whom was Kyabjé Yongzin Ling Rinpoché, I memorized the ‘Ornament for Clear Realizations’ and ‘Entering into the Middle Way’. I also received the oral transmission of both these books and even today can recite them from memory. In addition, I read the auto-commentary to ‘Entering into the Middle Way’ every day.
“We can best remember Jé Rinpoché but studying well and integrating what we learn with our own minds. Practice is not a matter of putting on this or that colour hat, it’s about study and incorporating what we learn within.”

His Holiness announced that to begin with he was going to read ‘Destiny Fulfilled’ in which Tsongkhapa revealed the progress he made in study and practice. The fourth verse reveals a summary of this:

In the beginning, I sought much learning.
In the middle, all teachings dawned on me as spiritual exhortation.
In the end, I practised day and night.
I dedicated all this virtue for the dharma to flourish.

The text consists of three chapters, the first illustrating how Tsongkhapa sought extensive learning. The second refers to a middle period when all scriptural traditions arose as spiritual instructions. The third chapter discloses how in the end he practised day and night and dedicated all virtues to the spread of the teaching.

Turning to the ‘Three Principal Aspects of the Path’, His Holiness explained that it was written in response to a request from Tsakho Önpo Ngawang Drakpa, who was one of Jé Rinpoché’s close disciples. Indeed, he promised him that if he followed his instructions well, when he, Tsongkhapa, became a Buddha, he would share the first nectar of his teaching with him. 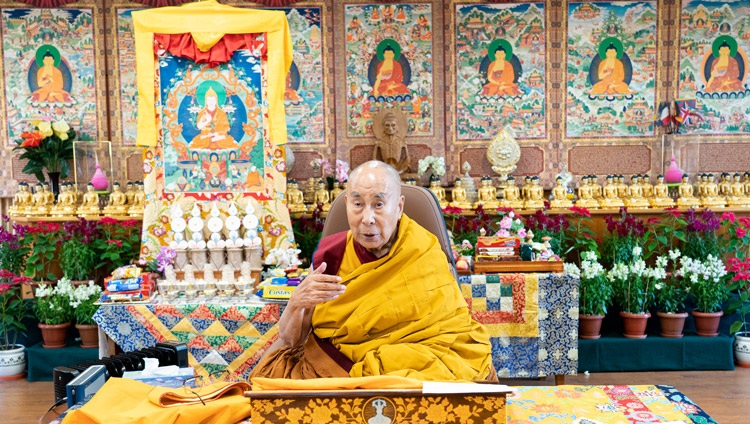 His Holiness the Dalai Lama addressing the virtual audience during his teaching to commemorate Jé Tsongkhapa online from his residence in Dharamsala, HP, India on December 29, 2021. Photo by Ven Tenzin Jamphel

The text opens with an expression of homage to the venerable teachers. It goes on to outline the three principles of the path, the determination to be free, the awakening mind and the wisdom understanding dependent arising.

In relation to cultivating the awakening mind, His Holiness quoted verses from the end of the sixth chapter of Chandrakirti’s ‘Entering into the Middle Way’ that state that the bodhisattva sees clearly that the three realms in their entirety are unborn from their very start, and through the force of conventional truth, he journeys to cessation. He also generates compassion for beings bereft of protection. And like a king of swans, with white wings of wisdom and compassion spread wide, the bodhisattva soars to the excellent far shore.

With reference to wisdom His Holiness pointed out that Jé Rinpoché advises ‘strive to understand dependent arising,’ rather than strive to understand emptiness. He clarified that this is because when you understand dependent arising you dispel extreme views of existence and non-existence simultaneously. His Holiness mentioned the three verses from Chandrakirti’s ‘Entering into the Middle Way’ that refer to the logical absurdities that arise from assuming something is objectively real.

If the intrinsic characteristics of things were to arise dependently,
things would come to be destroyed by denying it;
emptiness would then be a cause for the destruction of things.
But this is illogical, so no real entities exist. 6.34

Thus, when such phenomena are analysed,
nothing is found as their nature apart from suchness.
So, the conventional truth of the everyday world
should not be subjected to thorough analysis. 6.35

In the context of suchness, certain reasoning disallows arising
from self or from something other, and that same reasoning
disallows them on the conventional level too.
So, by what means then is your arising established? 6.36

Finally, Tsongkhapa states that ‘When you understand the arising of cause and effect from the viewpoint of emptiness, you are not captivated by either extreme view.’

Next, His Holiness read the ‘Song of Spiritual Experience’, which consists of
concise points of the Stages of the Path. Tsongkhapa advises:

You will know that the teachings are without contradictions;
How to take all the scriptures as personal instructions.

Further on the text highlights each of the perfections, encouraging the reader not to give in to fatigue, but keep up a steady effort. When it comes to wisdom, the text makes clear that,

Wisdom is the eye for seeing profound suchness;
The path which totally uproots worldly existence. 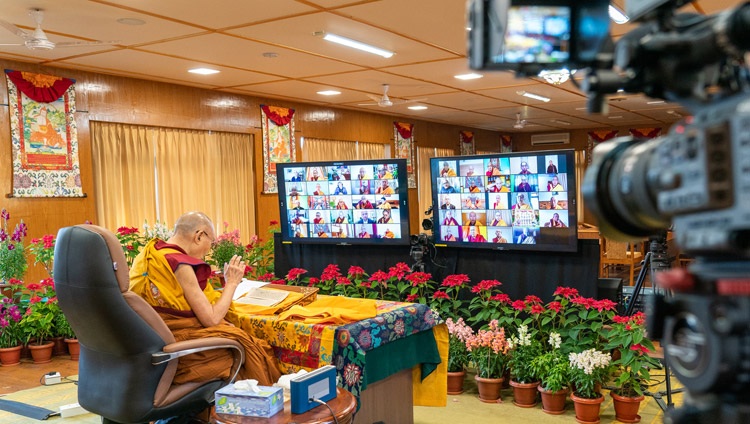 His Holiness the Dalai Lama reading from Jé Tsongkhapa’s ‘Three Principal Aspects of the Path’ during his online teaching from his residence in Dharamsala, HP, India on December 29, 2021. Photo by Ven Tenzin Jamphel

When he had come to the end of the text, His Holiness stressed once more the importance listening to and reflecting on the meaning of the teaching. It’s when you gain experience of what you’ve learned in meditation that a transformation of the mind comes about.

“We’re all followers of Jé Rinpoché,” His Holiness declared. “Whatever progress I’ve made has been achieved on the basis of the texts that we all have access to. The key is to integrate the teaching within. Change doesn’t come overnight; you have to keep up your effort.”

The session was brought to a close with the Chant Masters leading a recitation of the 1st Dalai Lama, Gendun Drup’s ‘Song of the Eastern Snow Mountains’, which begins:

That I, Gendun Drub, who tends to be lazy,
Now have a mind propelled by the Dharma to some extent,
Is due solely to the great kindness of this holy teacher and his chief disciples.
O perfect masters, your compassion is indeed unsurpassed.

“We still have access to Jé Rinpoché’s teachings. Their lineage of transmission survives. What we have to do is to learn how to put them into practice. To help me do this I read the special insight and awakening mind sections of the ‘Great Treatise on the Stages of the Path’. As we acquaint our minds with what is to be practised, familiarizing ourselves with it over and again, it will have an effect. Transformation will take place.”

The final prayer was the dedication prayer from the ‘Great Treatise on the Stages of the Path’, which includes the verse:

In regions where the supreme, precious teaching has not spread
Or where it has spread but then declined,
May I illumine that treasure of happiness and benefit
With a mind deeply moved by great compassion.