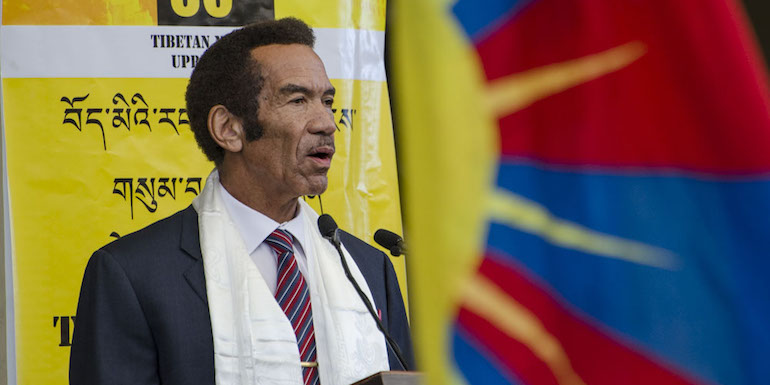 Dharamshala: From 7 to 10 May, parliamentary leaders and esteemed delegates will gather in Riga, Latvia for the 7th World Parliamentarians’ Convention on Tibet.

The World Parliamentarians’ Convention on Tibet seeks to reinvigorate and galvanize global support for Tibet through concerted efforts and deliberations on the parliamentary front.

The 1st World Parliamentarians’ Convention on Tibet was held in New Delhi in 1994, second WPCT in Vilnius (Lithuania) in 1995, third WPCT in Washington DC in 1997, fourth WPCT in Edinburgh in 2005 and fifth WPCT in Rome in 2009 and the sixth WPCT was held in Ottawa, Canada in 2012.

A day ahead of the 7th World Parliamentarians’ Convention on Tibet, His Excellency the Former President Lieutenant General Dr. Seretse Khama Ian Khama issued a statement to the delegates, appealing for united efforts to support the objectives of the Central Tibet Administration and the Tibetan people they represent.

The full statement as published by His office follows:

“His Excellency the Former President Lieutenant General Dr. Seretse Khama Ian Khama wishes to convey his best regards to the 7th World Parliamentarians’ Convention on Tibet to be held in Riga, Latvia from 7-10 May 2019.

The World Parliamentarians’ Conventions on Tibet are held in order to raise awareness of Tibetan cause. Tibet has had a tumultuous history, during which it has spent some periods functioning as an independent entity and others ruled by powerful Chinese and Mongolian dynasties until 1950 when China sent in thousands of troops to enforce its claim on the region.

In 1959, after a failed anti-Chinese uprising, the 14th Dalai Lama fled Tibet and set up a government in exile in India. Most of Tibet’s monasteries were destroyed in the 1960s and 1970s during China’s Cultural Revolution. Thousands of Tibetans are believed to have been killed during periods of repression and martial law.

Just as the progressive world united to end apartheid in South Africa, the Former President appeals for united efforts to support the objectives of the Central Tibet Administration and the Tibetan people they represent.”