Thekchen Chöling, Dharamsala, HP, India – This morning Prof Dheeraj Sharma, Director of the Indian Institute of Management, Rohtak, gave His Holiness the Dalai Lama a warm welcome to a conversation on the theme ‘Facing Challenges with Compassion & Wisdom’ organized by the Institute. He expressed the hope that His Holiness might have something to say about the world today in which some people are subject to strife and conflict, while others live in significant comfort. It’s a world in which some people fail to see others in terms of compassion, concerned as they are with their own entitlement.

Prof Dheeraj Sharma, Director of the Indian Institute of Management, Rohtak, welcoming His Holiness the Dalai Lama to thier program on ‘Facing Challenges with Compassion & Wisdom’ online from his residence in Dharamsala, HP, India on December 23, 2021. Photo by Ven Tenzin Jamphel

“I’m extremely happy to have this opportunity to talk to Indian friends,” His Holiness replied. “China and India are the world’s most populous nations, but it is India that has preserved its several thousand-year-old traditions of doing no harm— ‘ahimsa’ and compassion— ‘karuna’. What’s more, all the world’s religious traditions live together in this country. There is a long-standing tradition of religious tolerance here. There will always be a few people who stir up trouble, but otherwise the importance attributed to doing no harm means that religious harmony prevails.

“Scholars may debate the finer philosophical standpoints these traditions adopt, but, in terms of the attitudes and behaviour of ordinary people, India shows by example that religious traditions can live peaceably side by side.

“As far as modern education is concerned, however, there is perhaps too much emphasis on a materialistic way of life. This means that there is a need to pay greater attention to incorporating compassion and doing no harm into the curriculum.

“In the last century, Mahatma Gandhi demonstrated how ‘ahimsa’, in the form of non-violence, could be effectively employed in the Indian freedom struggle. Subsequently, similar leaders in South Africa and the US took up his example. In today’s world, where moral principles are few and far between, India has the potential to reveal the importance of compassion.

“We must also ensure that the younger generation appreciate that, since we are all human beings, we need to respond to one another with warm-heartedness. Each of us had a mother and survived because of the care and affection she showed us. It’s because our lives begin in this way that compassion is part of our nature.

His Holiness the Dalai Lama speaking on ‘Facing Challenges with Compassion & Wisdom’ organized by the Indian Institute of Management, Rohtak, online from his residence in Dharamsala, HP, India on December 23, 2021. Photo by Ven Tenzin Jamphel

“After centuries of fighting and dedicating resources to the manufacture of weapons we need to revive the ideas of compassion, non-violence and doing no harm in the wider world. One approach to this is to combine modern scientific knowledge with ‘ahimsa’ and ‘karuna’. These days scientists I meet increasingly appreciate the importance of finding peace of mind for the effects it has on both the individual and society at large. I believe India can lead the way in combining knowledge from ancient and modern sources in a secular context.”

While answering questions from faculty members, students, and members of the IIM Rohtak community, His Holiness reiterated his admiration for the fact that all the world’s religious flourish in India. Each of them teaches methods for promoting compassion.

He suggested that cultivating extreme desires with a sense of entitlement is short-sighted, when challenges we face make clear that we need instead to take the entire world and the whole of humanity into account. Being too materialistic is similarly short-sighted. The purpose of life is not to harm and kill each other, but to foster a supportive community, keeping in mind the oneness of humanity. Communities founded on the principles of compassion and doing no harm contribute to a more peaceful world.

His Holiness declared that we have to live together on this one planet. Therefore, it’s unrealistic to view others as enemies. Because Tibetans and Chinese ultimately have to live together, fighting and killing each other is of no use at all. Wherever we live our goal should be to create a more peaceful world.

The climate crisis and its serious consequences are telling us that we must learn to work together since we also have to live together. We need to protect the earth and preserve the lives of human beings and other creatures. 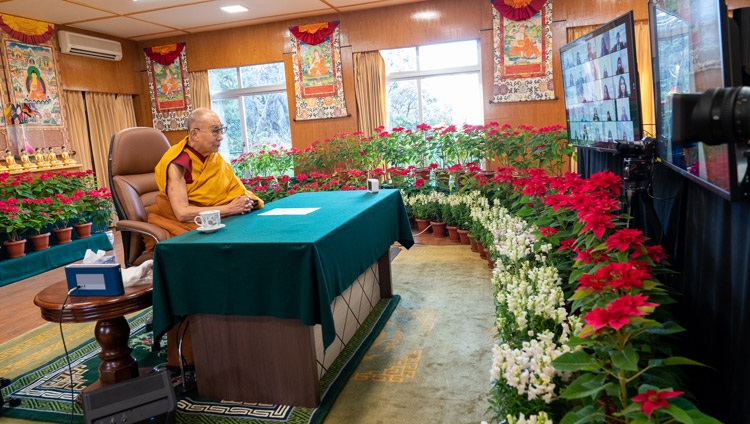 His Holiness the Dalai Lama addressing the virtual audience during his talk on ‘Facing Challenges with Compassion & Wisdom’ organized by the Indian Institute of Management, Rohtak, online from his residence in Dharamsala, HP, India on December 23, 2021. Photo by Ven Tenzin Jamphel

His Holiness averred that it is possible to overcome conflict. He pointed out two positive developments that followed the two world wars last century. One was the emergence of the United Nations and the other was the founding of the European Union (EU). After centuries of conflict and warfare, the leaders of Germany and France decided that enough was enough and it was time to put the larger common interests of Europe before those of individual member states. His Holiness suggested that the nations of Africa, Latin America and Asia would do well to follow this example.

Altogether, His Holiness recommended taking a broader perspective and seeking the long-term interest on issues that confront us. Many problems are made worse by only looking at them from a narrow point of view. He advised that the media should do their part by promoting basic human values. He suggested that the notion of the survival of the fittest is out of date. Competition is only of limited value when we all have to live together. It’s no longer enough to think only of our own short-term interest.

Asked why he refers to himself as a ‘son of India’, he agreed that he was born in Tibet, but clarified that Tibetan culture is rooted in the teachings of the Buddha, particularly as they were presented at the University of Nalanda. He declared that since he had studied Indian books, the works of Indian masters, from childhood, his mind is filled with Indian thought. Political difficulties resulted in his becoming a guest of the Government of India, a country where he enjoys freedom.

As he had mentioned earlier, China and India are the two most populous nations on earth, but it is India where democracy thrives and religious freedom flourishes. As more and more scientists take an interest in the workings of the mind and emotions, there is growing appreciation for ancient Indian knowledge. All these qualities of India are a source of pride.

Prof Dheeraj Sharma thanked His Holiness for taking part in the morning’s conversation, assuring him that the audience had learned much from what he had to say. For his part, His Holiness replied that he was very happy to have had the opportunity to exchange views with Indian friends and offered his thanks in turn.