Shewatsel, Leh, Ladakh, UT, India – This morning His Holiness the Dalai Lama consecrated the newly constructed Thiksey Library and Learning Centre, a project for which he conducted the ground-breaking ceremony in July 2018. 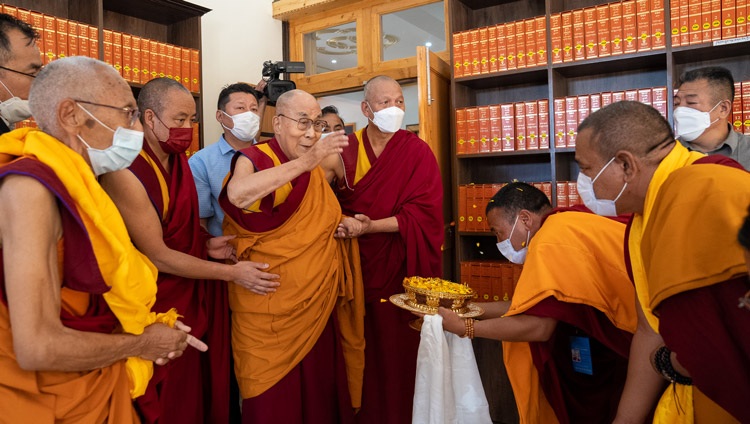 In his welcoming address, Thiksey Rinpoché paid his respects to His Holiness, the other distinguished guests and 3000 students from 15 schools and colleges around Leh. He lauded His Holiness’s commitment to promoting human values, encouraging inter-religious harmony, preserving Tibetan religion and culture and protecting Tibet’s natural environment, as well as his efforts to create a greater awareness of and interest in ancient Indian knowledge. He described these efforts as beneficial and relevant to today’s world.

Rinpoché also reported that since the Library and the Learning Centre became operational in 2020, more than 350 students have been trained for periods of six weeks in secular ethics through the Social, Emotional, and Ethical Learning (SEE Learning) program. The Learning Centre has also provided free tuition to many students during the winter when their schools are generally closed. Besides these achievements, many school students and undergraduates have been using the Centre’s facilities to their advantage. 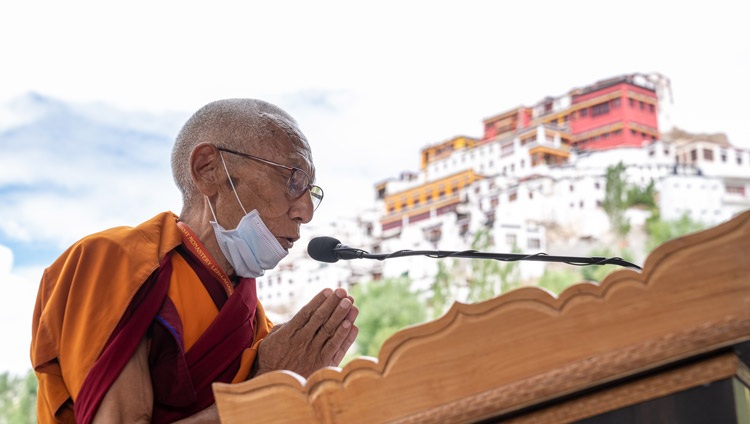 Thiksey Rinpoché delivering his welcoming address at the start of His Holiness the Dalai Lama’s talk to students at the teaching ground at the Library and Learning Centre at Tiksey Monastery in Leh, Ladakh, UT, India on July 25, 2022. Photo by Tenzin Choejor

One female student speaking in Ladakhi on behalf of all the students present welcomed His Holiness to Thiksey and thanked Thiksey Rinpoché for the facilities that have been provided at the Library and the Learning Centre. Another, speaking in English, expressed gratitude to Thiksey Rinpoché for the hard work he has put in to establish this centre where young people can study and prepare for life. She noted that the centre not only affords opportunities to learn, but also provides nourishing food to eat. She thanked Thiksey Rinpoché and his staff for their generosity and wished His Holiness a long life.

His Holiness opened his remarks by observing how pleased he was to be able to visit Ladakh again. He noted how touched he has been by the genuine love and affection shown to him by Ladakhis young and the old, and thanked them all.

“I very much appreciate the harmony that pervades the Ladakhi community,” His Holiness declared. “Whether we belong to one ethnic group or another, and whether we practise this religion or that, we are all essentially the same as human beings. From the moment of birth, when our mothers take care of us, until we breathe our last, we are all the same. Therefore, it’s in the interest of us all to live in peace and harmony.

“Whether we have faith in religion or not, the benefits of warm-heartedness can be taught as part of a training in secular ethics. Wherever I go I adopt a friendly attitude—I smile and other people smile in return. 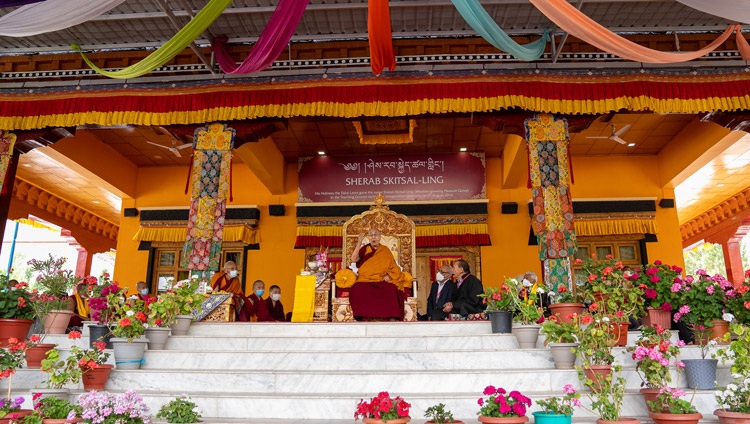 His Holiness the Dalai Lama addressing the gathering at the teaching ground at the Library and Learning Centre at Tiksey Monastery in Leh, Ladakh, UT, India on July 25, 2022. Photo by Tenzin Choejor

“For thousands of years India has maintained the traditions of doing no harm— ‘ahimsa’ and compassion—‘karuna’, which are a source of happiness engendering peace within individuals and contributing to the creation of a happier world. Warm-heartedness is a key factor to living a happy life because we all have to live together.”

His Holiness recalled that in the seventh century, despite close relations with the Chinese, the 33rd Tibetan Emperor Songtsen Gampo chose to devise a new mode of Tibetan writing modelled on the Indian Devanagari alphabet. Consequently, when the Indian master Shantarakshita visited Tibet in the eighth century, at the invitation of Tibetan emperor Trisong Detsen, he urged Tibetans to translate Indian Buddhist literature into Tibetan. This enabled Tibetans to learn about Buddhism in their own language rather than having to rely on Sanskrit or Pali.

His Holiness explained that the more than 300 volumes of the Kangyur and Tengyur deal with a wide range of religious, philosophical and scientific ideas and that today Tibetan remains the most accurate language in which to study them. Western neuroscientists and psychologists are showing a growing interest in what Buddhism has to say about the workings of the mind and emotions. Moreover, Chinese translations of selective scientific and philosophical materials derived from Buddhist literature have prompted professors in Chinese Universities to acknowledge that Tibetan Buddhism clearly preserves the rational traditions of Nalanda.

His Holiness conceded that Tibet may presently be under Chinese Communist control, but in the long run Tibetans will be able to help the growing number of Chinese who take an interest in Buddhism by vouchsafing the means to achieve peace of mind.

Some of the more than 3000 students from 15 schools listening to His Holiness the Dalai Lama speaking at the teaching ground at the Library and Learning Centre at Tiksey Monastery in Leh, Ladakh, UT, India on July 25, 2022. Photo by Tenzin Choejor

“Another point I want to share with you,” His Holiness announced, “is that global warming is becoming a really serious problem. One of the positive steps we can take to counter it is to plant and care for trees. In this context it’s wonderful to see so much greenery here at Thiksey. The Indian environmental activist Sunderlal Bahuguna gave me the task of reminding people in the Himalayan region how important this is. I promised I would, so please plant and take care of trees wherever and whenever you can.”

Responding to questions from the audience, His Holiness clarified that while competition can lead to negative results in some cases, in others it can have a positive effect. He cited the example of philosophical debate, as it is conducted in the great Tibetan centres of learning, in which competition between challenger and respondent can lead to deeper understanding in them both. The key to fruitful competition is having a compassionate motivation.

Asked why there are so many religious traditions in the world His Holiness responded that although on a physical level we all love food, we also like variety. In a similar way, studying different philosophical points of view can help us sharpen our minds.

Regarding the tendency of young Ladakhis to seek solace in alcohol and drugs, His Holiness pointed out that one of the shortcomings of modern education is how little it has to say about inner values. In this connection he is convinced of the beneficial potential of combining modern education with an ancient Indian understanding of the workings of the mind and emotions. He spoke of his hopes to consult teachers and educators at institutes of higher learning such as Jawaharlal Nehru University in Delhi about how this could best be achieved. 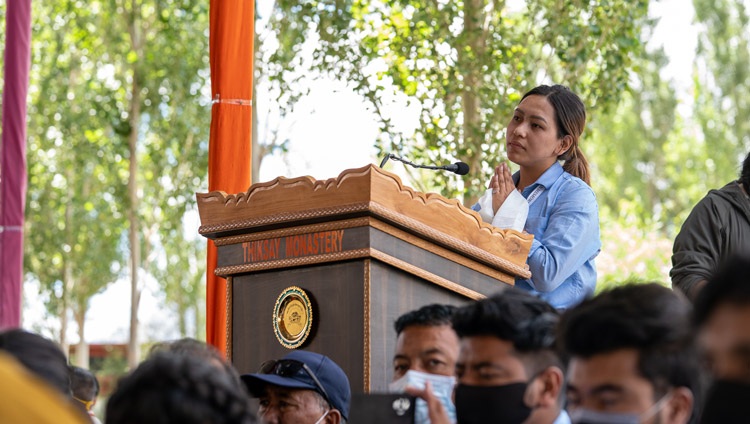 A student from the among the 3000 attending the program at the teaching ground at the Library and Learning Centre at Tiksey Monastery listening to His Holiness the Dalai Lama answer her question in Leh, Ladakh, UT, India on July 25, 2022. Photo by Tenzin Choejor

Finally, His Holiness told a young woman who recognised the value of concentration, but wanted to know how to overcome distraction, that we are all familiar with our five sense consciousnesses. However, when it comes to training the mind, we need to pay attention instead to our mental consciousness.

As the event came to an end, His Holiness saluted the audience with folded hands and waved to those at the back of the crowd. The sound of traditional horns and drums accompanied his departure for lunch.