i Compassion and Dignity | Bureau of His Holiness the Dalai Lama

Thekchen Chöling, Dharamsala, HP, India – As soon as His Holiness the Dalai Lama took his seat this morning, Philip P. DiStefano, Chancellor of the University of Colorado, Boulder, welcomed him to a conversation about compassion and dignity in schools. He noted how important these qualities are, observing that the future depends on them. When His Holiness was last in Boulder, in 2016, the seeds of the Crown Institute were being planted. Today, this interdisciplinary institute is focused on wellness, connection and the community. The Chancellor concluded: “Whether you are a teacher, parent or individual observer, I hope you will be inspired by the wisdom shared here tonight.” 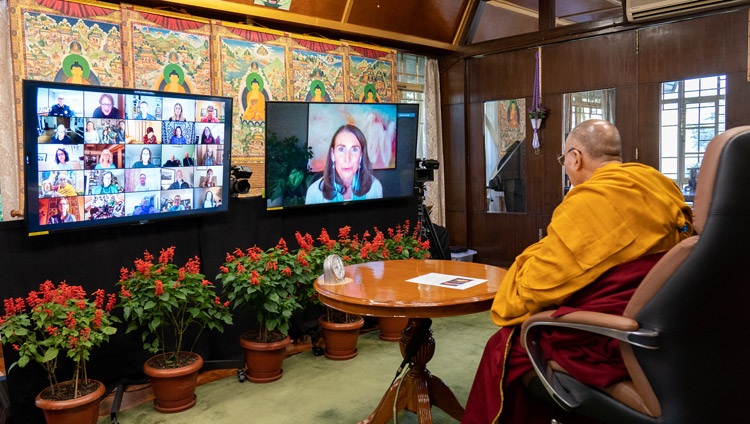 Sona Dimidjian, Institute Director, Renée Crown Wellness Institute and Professor, Department of Psychology and Neuroscience University of Colorado Boulder speaking at the start of the program with His Holiness the Dalai Lama online from his residence in Dharamsala, HP, India on October 26, 2021. Photo by Ven Tenzin Jamphel

Sona Dimidjian, Institute Director, Renée Crown Wellness Institute and Professor, Department of Psychology and Neuroscience University of Colorado Boulder spoke next. She declared that His Holiness’s teachings have inspired people around the world to be curious about the benefits of compassion in education. Meanwhile, his conversations with scientists have inspired new research that has demonstrated the positive impacts of compassion training.

She stated that she and her colleagues had wanted to create a program that would deepen their practices of compassion as a foundation for all their teaching and for creating safe, inclusive, and just schools. They worked in partnership with educators and experts in compassion practice to design a year-long program called “Cultivating Compassion & Dignity in Ourselves and Our Schools,” in an effort to bring compassion into the mainstream of education. She invited His Holiness to speak about the importance of compassion in education,

“Thank you,” he began, “you do me a great honour in giving me this opportunity to talk about inner values. It’s quite simple; I think that all sentient beings, indeed all living things on our planet, including flowers and trees that to our perception have no consciousness, appreciate being at peace. It was perhaps a Russian who told me that if you scold one plant every day and speak soothingly to another similar one, they develop differently. Simply put, if we take care of plants, they grow well. If we neglect them, they die.

“All mammals on our planet want to survive and being at peace is crucial to survival. The reality is that as soon as we are born, our mothers take care of us and treat us with compassion. If it were otherwise, we’d die. Gradually, as we grow up, we develop compassionate relations with members of our family, which in due course are extended to other members of the community.

“In the past, a great deal of violence and killing has taken place out of anger and hatred. Some people may think that anger brings energy to a situation, but it is only effective in the short term. These days human beings want peace because peace is the basis of life. To develop a more peaceful world we must also look within. When our minds are at peace, in a crisis, even if there is a weapon to hand, we’ll not be inclined to use it.

“Ultimately the foundation of peace of mind is loving kindness. Every day, as soon as I wake up, I meditate on compassion, and it brings me peace and tranquility. It’s not just a matter of being free from disturbance, but of being moved by love and compassion. Peace of mind isn’t just a religious topic; it underpins the survival of humanity. Even those who trouble us are human beings and deserve our compassion. 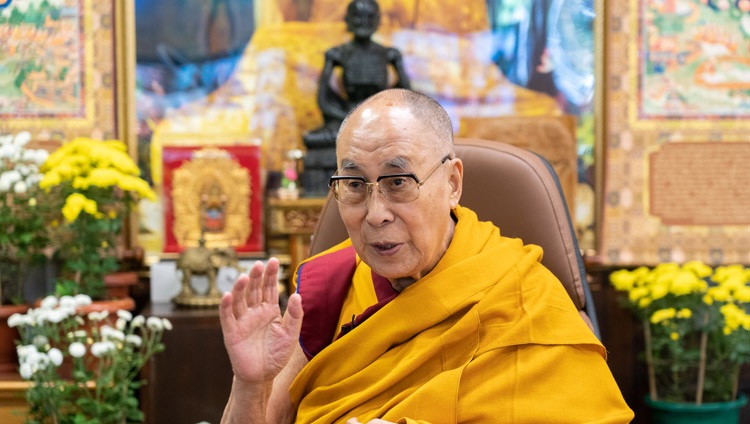 His Holiness the Dalai Lama speaking on the topic Compassion and Dignity online from his residence in Dharamsala, HP, India on October 26, 2021. Photo by Ven Tenzin Jamphel

“Although it may seem that anger brings energy, if we look at it more closely, we’ll see that it’s inner peace that brings us inner strength. The energy that anger brings is not only short-lived, but it can also become self-destructive.

“In my experience, the practice of compassion is very helpful. Everyone wants to live a peaceful life and compassion is a key factor in fulfilling that wish. Whether you are concerned with promoting your own well-being or the well-being of others, at root it involves having an altruistic intention. Similarly, whether you are concerned with your immediate or long-term welfare, if you’re able to cultivate a genuinely altruistic mind—a kind heart—in the short term you’ll feel a sense of peace within you. The long-term benefit manifests in physical well-being and robust good health.

“Whether in relation to individual well-being or the well-being of society, we recognize that when someone actively cultivates a kind heart, it changes the atmosphere around them. This is why we can say that an altruistic intention—a kind heart—is a source of general well-being.

“In my own life, quite often in the early morning, I imagine the Buddha in the form of the statue before me saying the following words to me:

“For those who fail to exchange their own happiness for the suffering of others, Buddhahood is certainly impossible – how could there even be happiness in cyclic existence? 8/131

Proceeding in this way from happiness to happiness, what thinking person would despair, after mounting the horse, the awakening mind, which carries away all weariness and effort? 7/30

“If you cultivate a kind heart, in the short term it brings peace of mind and a more resilient immune system. On the other hand, if your mind is agitated and disturbed, you won’t even be able to enjoy your food. And if you’re really angry, you might even smash the plate it’s served to you on.

His Holiness the Dalai Lama addressing the virtual audience during his conversation on Compassion and Dignity online from his residence in Dharamsala, HP, India on October 26, 2021. Photo by Ven Tenzin Jamphel

“The verses above come from a book by the Indian master Shantideva. I recite them every day, including the following:

“Why say more? Observe this distinction: between the fool who longs for his own advantage and the sage who acts for the advantage of others. 8/130″

His Holiness remarked that even animals appreciate kindness. If you are kind to a dog, it wags its tail. If you scold it, its tail droops. He suggested that when we are young loving-kindness is crucial, but as we grow up, we pay it less attention. This is a mistake. After all, the purpose of education should be to contribute to our peace of mind. Therefore, we should pay more attention to warm-heartedness.

We are social animals who have to live together. That’s the reality. All we seven billion human beings must live as brothers and sisters. If we only think about politics, money and weapons, we’ll never be able to solve any of our problems.

“Therefore,” His Holiness concluded, “I’m dedicated to promoting warm-heartedness in our day-to-day life. This is what we have to pay attention to.’

Sona Dimidjian introduced a number of teachers and educators who had questions to ask. To start with His Holiness acknowledged the need to keep good intentions at the forefront of the mind. He pointed out that patience and forbearance, for example, derive from compassion, but are only relevant and effective when we are faced with difficulties. We don’t need to be patient when things are going well. This is similar to only taking medicine when we are ill.

He noted that it’s recognizing the suffering of others that prompts us to be compassionate. Suffering can’t be overcome using force and deploying weapons. We have to cultivate a compassionate mind, and this, the source of inner peace, is what will lead to a more peaceful world.

Besides being eager to learn their lessons, His Holiness observed that students, simply as human beings, appreciate compassion. When their teacher reveals a compassionate attitude, combined with a sense of responsibility and concern for their student’s broader prospects, they’ll respond positively. If, however, they sense that the teacher has no such concern and is only concerned with earning their pay, students won’t be able to leave the class quickly enough. 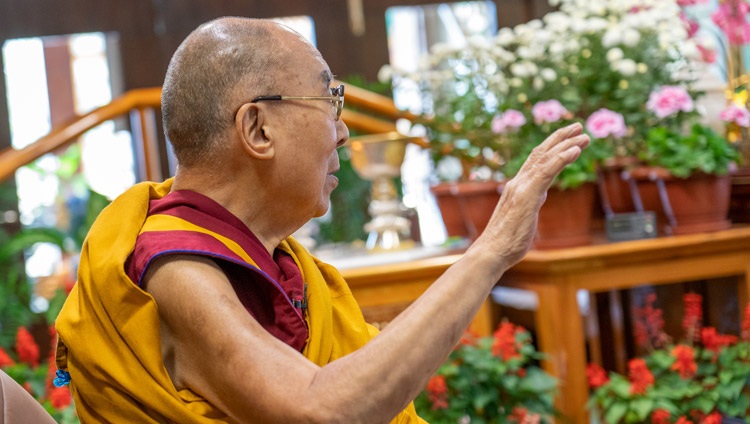 His Holiness the Dalai Lama answering questions from the virtual audience during his conversation on Compassion and Dignity online from his residence in Dharamsala, HP, India on October 26, 2021. Photo by Ven Tenzin Jamphel

“During my own lessons as a boy with my tutor,” His Holiness divulged, “he showed me great kindness. And as a result, I wanted to spend more time with him. Such warm-heartedness plays a key role in making us feel happy and secure.

“If I may say so, the Dalai Lama is popular, not because I want to be, but because people always see a smile on my face. And that’s because I cultivate warm-heartedness.”

His Holiness reiterated that if teachers not only teach according to the curriculum, but are also genuinely concerned about their students’ welfare, close relations will flourish between them. And when a teacher is genuinely dedicated to the betterment of humanity, he or she will naturally treat their students with dignity.

With regard to justice and compassion, in the past there was less talk about inner values. Instead, people relied on suspicion and the use of force. But the world has changed and now there is a much greater role for warm-heartedness. Attitudes are more realistic and more mature. There is a clearer understanding of the importance of achieving peace of mind. There is also greater awareness that it’s basic human nature to be compassionate. Nurturing a more compassionate motivation leads to greater truth and honesty.

Addressing concerns to make an entire school more compassionate, His Holiness repeated that since education tends to have materialistic goals, it needs to value and include warm-heartedness too. Compassion yields peace of mind and such inner peace fosters health and well-being among teachers and students. He declared his firm belief that it’s possible to take a new approach to education that is rooted in warm-heartedness.

He added that compassion is the basis of courage and determination. These qualities are required because suffering cannot be overcome immediately. We have to be realistic. We must seek out its causes and uproot them. This is something we human beings can do because we have intelligence and self-confidence.

His Holiness restated that the most important thing to teach children about compassion is the need to combine human intelligence with warm-heartedness.

Sona Dimidjian thanked His Holiness for his contribution to the conversation that had taken place and asked Stephen Butler, the Executive Director of the Compassion Institute, to offer some closing reflections. He also thanked His Holiness for the insight that the fundamental human quality of compassion has the power to transform our lives and the world. He expressed the wish that His Holiness has a long and stable life and that we may all work to our utmost to establish compassion as the seed, the nourishment and the fruit of a kinder and more caring humanity.

In conclusion His Holiness responded that if human beings are to be happier, education must be combined with warm-heartedness. The aim is for people to cultivate healthier, more peaceful minds. Fear gives rise to anger and anger destroys peace of mind. The more compassionate we are, the less fearful we will be, and the greater will be our inner strength and self-confidence. The point is to be a happy person, self-assured and courageous.

“If those of you who have taken part in today’s discussion or have simply listened to it,” His Holiness remarked, “feel that anything we’ve said was reasonable, please, think about it, make yourselves familiar with it and share it with your family and friends.

“Thank you. See you again.”