Thekchen Chöling, Dharamsala, HP, India – This morning five organizations, the Tendhong Cultural Preservation Society (Mön), the International Jonang Well-being Association, the Domey-Mang-Bha-Ja-Sum Association, the alumni of Namgyal Higher Secondary School, Nepal, and the Sydney Tibetan Association came together to offer a prayer for His Holiness the Dalai Lama’s long life at the Tsuglagkhang, the Main Tibetan Temple in Dharamsala. His Holiness met their representatives at the gate to his residence and they escorted him as he walked through the temple yard, smiling and waving at well-wishers on the way. He was presented with the traditional Chema Changpu from which he took a pinch. Further on a group of dancers performed for his delight. 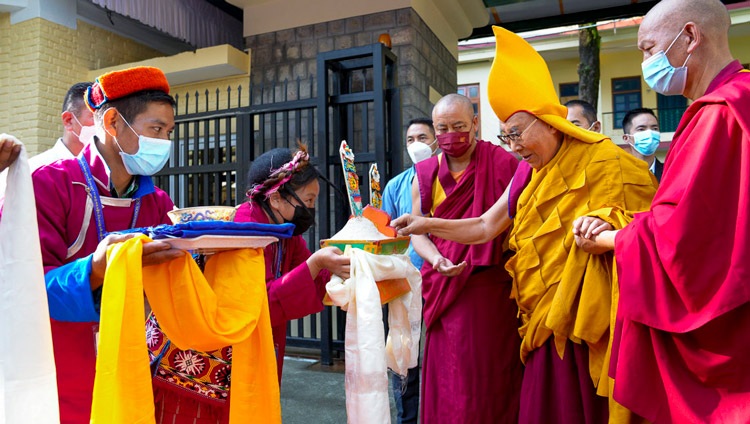 His Holiness the Dalai Lama receiving a traditional welcome on his arrival at the Main Tibetan Temple courtyard in Dharamsala, HP, India on September 7, 2022. Photo by Ven Tenzin Jamphel

In the temple, facing His Holiness as he sat on the throne before the statue of Buddha Shakyamuni was a line of lamas who led the prayer—Gyabong Rinpoché, Abbot of Tawang Monastery, the Dorjé Löbpön of Namgyal Monastery, Jonang Gyaltsab Rinpoché, Ganden Tri Rinpoché, Ling Rinpoché, Guru Tulku Rinpoché and Khenpo Nyima Tashi, Abbot of the Kagyu Monastery in Jang, Tawang, Arunachal Pradesh.

Ganden Tri Rinpoché came forward to welcome His Holiness as proceedings began with the recitation of a tribute to the various incarnations of Avalokiteshvara who have appeared in India and Tibet.

Addressing the congregation His Holiness told them, “I am familiar with the experience of the awakening mind of bodhichitta. I renew the wish expressed in this verse every day,

As long as space endures,
And as long as sentient beings remain,
Until then, may I too remain
To help dispel the misery of the world.

“I belong to the lineage of Dalai Lamas and have a strong link to the people of the Himalayan region. I was recently in Ladakh and I hope to make a visit to Mön Tawang again soon. 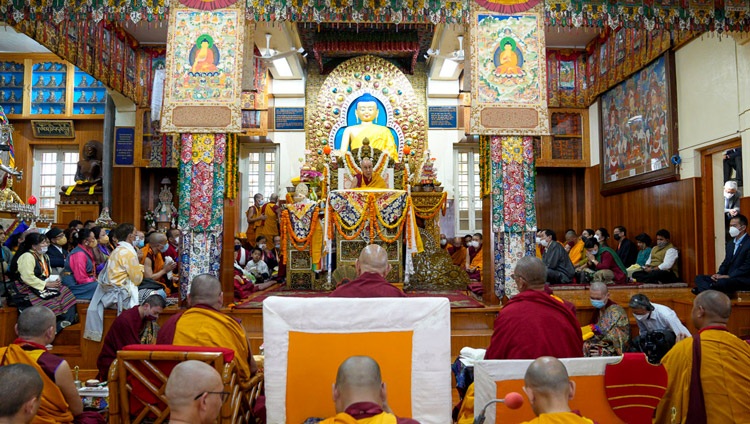 His Holiness the Dalai Lama addressing the congregation during the Long Life Prayer at the Main Tibetan Temple in Dharamsala, HP, India on September 7, 2022. Photo by Ven Tenzin Jamphel

“In this life alone I’ve been able to serve the Dharma and sentient beings and I make a determination to live long in order that I may continue to do so. I feel I can live for another 10 to 20 years or so. I’m not concerned with money or fame, only with being able to benefit others. And for that reason, I pray to live long. The prayer that is being performed today involves Arya Tara and I say her mantra for longevity every day.

“During my recent visit to Ladakh and Zanskar I was moved by the faith and trust of the people there. Tibetans in Tibet are also unflinching in their devotion, but they are living under oppressive conditions. Meanwhile, an increasing number of people in China are taking an interest in Buddhism and even Chinese officials are beginning to acknowledge that I’m not the reactionary they make me out to be. In fact, it’s not just human beings who take an interest in the Dharma, I have dreamt of spirits and deities who have faith in me and I’ve urged them too to cultivate the awakening mind of bodhichitta for the benefit of others.”

At a certain point the Chantmaster made a mandala offering and a procession of people carrying gifts began to file through the temple. Ganden Tri Rinpoché approached the throne to recite the eulogy and request to His Holiness to live long. 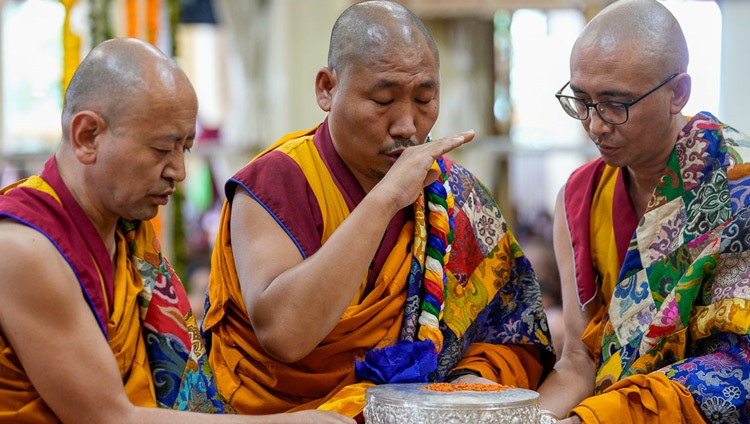 The Chant Master reciting a mandala offering during the Long Life Prayer for His Holiness the Dalai Lama at the Main Tibetan Temple in Dharamsala, HP, India on September 7, 2022. Photo by Ven Tenzin Jamphel

“You are the leader of the Tibetan people,” he declared. “We, members of five organizations, including people from Arunachal Pradesh, the Jonang tradition and so on, pay our respects at your feet.

“It was prophesied that Avalokiteshvara would appear in Tibet, which he did. Nyetri Tsanpo was followed by others, the line of Dalai Lamas among them, most especially the 13th Dalai Lama, whose reincarnation, born in Amdo near Kumbum, you are. You studied rigorously in the traditional way.

“With undaunted courage you have served others without tiring. With fortitude and skilful means, you have discharged spiritual and temporal responsibilities in leading the Tibetan people. You introduced democracy so we can elect our representatives.

“The award of the Nobel Peace Prize and the Congressional Gold Medal acknowledged your contribution to humanity.

“369 years after the Great Fifth Dalai Lama you devolved your political responsibilities to Tibetans’ elected leaders. 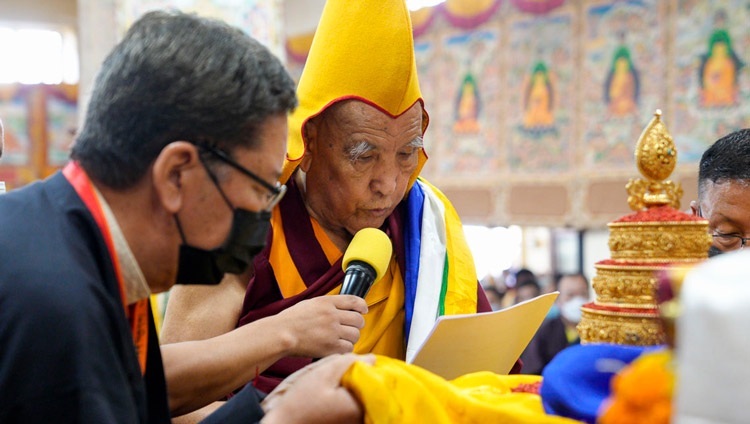 Ganden Tri Rinpoché reciting praises to His Holiness the Dalai Lama during the Long Life Prayer at the Main Tibetan Temple in Dharamsala, HP, India on September 7, 2022. Photo by Ven Tenzin Jamphel

“You have also taken steps to protect the environment.

“These are just some of your achievements—there are many more.

“We pray that, like Thangtong Gyalpo, you may live to be 125 years old. We pray that we may be taken care of by you and pledge that we will abide by your instructions. Therefore, we make these offerings to you.”

Jonang Gyaltsab Rinpoché was in the middle of offering emblems of the eight auspicious substances when the Nechung Oracle appeared in spontaneous trance and came forward to pay his respects to His Holiness. 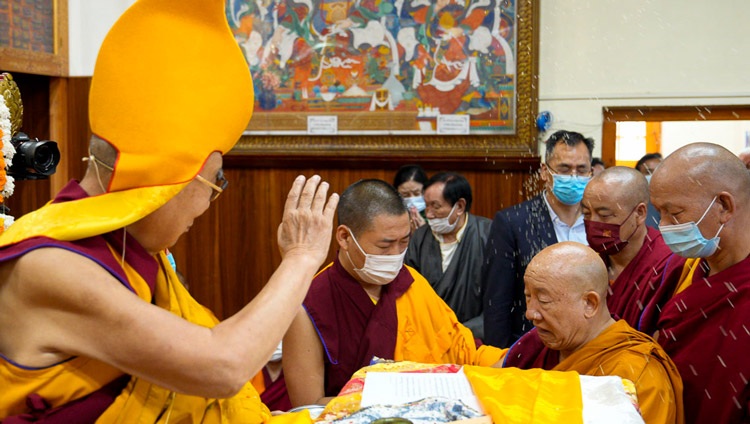 The Nechung Oracle in a spontaneous trance during the Long Life Prayer offered to His Holiness the Dalai Lama at the Main Tibetan Temple in Dharamsala, HP, India on September 7, 2022. Photo by Ven Tenzin Jamphel

Representatives of the patrons of today’s ceremony filed past the throne and received a silk scarf and protection cord from His Holiness. Guru Tulku Rinpoché offered a silver statue of Thangtong Gyalpo.

“As I said earlier,” His Holiness remarked, “I have strong links with the people of Arunachal Pradesh and the Himalayan region. Because of karma and past prayers, I have been able to serve them as well the Dharma and other sentient beings. And because I have this opportunity, I firmly aspire to live another two decades. I’d like to thank all of you, members of these five different organizations, for conducting this ritual for my long life today.

“I understand the Covid pandemic is rife in Arunachal Pradesh and also in Tibet. I will make prayers that it may be subdued. In China too the situation is serious. Let’s pray to Arya Tara to help Tibetans and Chinese at this time, to relieve their suffering and alleviate the fear in their minds. We also need to remember the people of Xinjiang with love and compassion.

“In addition, I pray that we may continue to preserve and promote the teaching of the Buddha through study, reflection and meditation.”

Finally, His Holiness was requested to give the oral transmission of the six-syllable mantra, Om mani padme hung, which he did. He revealed that he recites this mantra, along with the ‘Praise to the Buddha for Teaching Dependent Arising’, every morning and prays to Avalokiteshvara that there may be peace in the world. He led the crowd in reciting a full rosary of Om mani padme hung. 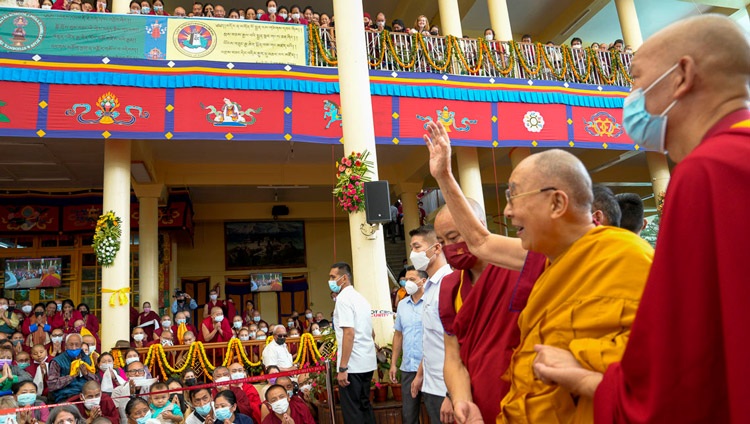 His Holiness the Dalai Lama waving to the crowd as he departs for his residence at the conclusion of the Long Life Prayer at the Main Tibetan Temple in Dharamsala, HP, India on September 7, 2022. Photo by Ven Tenzin Jamphel

As he left the temple and made his way down to the yard where his car awaited, His Holiness looked right and left, up and down, and wherever he could see people he smiled and waved to them—and they smiled and waved back.